A total of 74 species during the month (average of 74.1 for the previous ten years).  As expected,  July is a month of returning waders. 15 Species were recorded during the month although only Little Ringed Plover was new for the year.  Most notable was a single flock of 26 Common Sandpipers on the beach on 24th. Other new species for the year were Tufted Duck, Arctic Skua and Green Woodpecker.

Cloudy with a moderate SW wind. A Grey Plover and two Whimbrel flew west, a Common Sandpiper was on the Marsh Pool, joined briefly by a Green Sandpiper and there were two Dunlin on the pool from mid-morning. Later, there were 11 Ringed Plovers and 39 Turnstones roosting on the beach. One Chiffchaff was heard calling at the Obs.

A Roesel’s Bush Cricket was at the Obs.

Arriving at the Obs this morning, I was greeted by a strong smell of diesel. Looking down at the brook by the sluice the source of the aroma was all too clear. 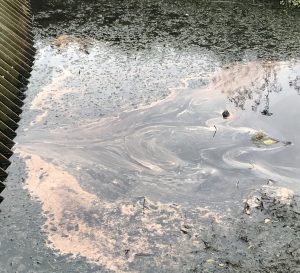 Later the slick had reached the beach 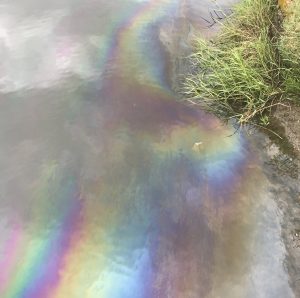 Arnie noted two Common Sandpipers on the Marsh Pool and a Redshank and 35 Turnstones on the beach.

Sunny, cooler, light southerly wind. Waders included four Oystercatchers west, a Common Sandpiper on the Marsh Pool and ten  Ringed Plovers and 32 Turnstones on the beach. 100 juvenile Herring Gulls were gathered on the beach. A Great Spotted Woodpecker flew east high over the area whilst a juvenile Willow Warbler along the east bank was the first returning bird after a poor Spring with only two records. 42 Swifts, a Sand Martin, three Swallows and four Grey Wagtails flew west.

Butterflies included a female Common Blue at the Obs. 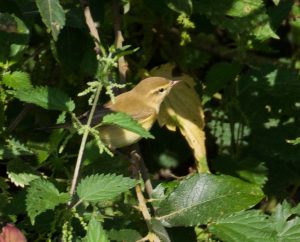 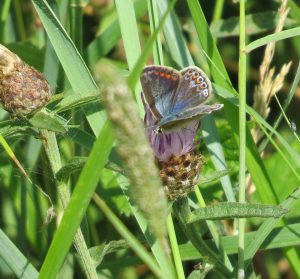 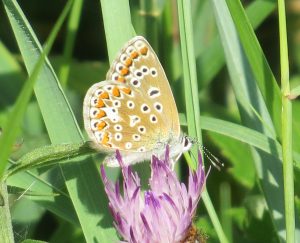 Helen reported seeing a Kingfisher. The first of what should be regular sightings from now into the New  Year.

Cloudy, moderate westerly wind and with steady rain. Two Little Terns flew west close inshore at 9 am and an Arctic Skua flew west at 9.50 am; the highlights of a soaking for Ted and me. Also, three Gannets flew west and a party of seven Teal flew west after stopping briefly on the sea. Waders included five Whimbrels and five Curlews and a Common Sandpiper west. Ten Sand Martins and ten Swallows also flew west and there were two-three Chiffchaffs calling between the upper brook and the Obs.

Cloudy at first then sunny with a light westerly wind. Almost the first bird seen was a juvenile Green Woodpecker on the football pitch near the churchyard. A new bird for the year and a typical record for this species which is regular here after the breeding season and on towards the end of the year and consists predominantly of juveniles. There were three Little Egrets and four Teal on the Marsh Pool. A juvenile Little Ringed Plover (our second of the month and year) was on the tide line in the company of Ringed Plovers and Turnstones. However, a minute or so after its discovery, it was flushed by a dog-walker! Other waders included seven Ringed Plovers and two Sanderlings on the beach, 22 Turnstones roosting between the groynes, a Green Sandpiper flying west at 8.48 am and a flock of seven Common Sandpipers west at 10.19 am. Three Whimbrel also flew west. A duck Mallard with seven medium-sized ducklings along the middle brook was the third brood of the year. Other birds included four Swifts, nine Swallows west and a Chiffchaff calling at the Obs.

Sunny, light SE wind, very warm. Ten Gannets flew east, a party of six Common Scoters flew west and another two flew east. There were four Little Egrets on the Marsh Pool. Two Sanderlings, still sporting much of their breeding plumage, were on the beach and three Lapwings dropped down onto the beach. Also, two Common Terns and a Yellow Wagtail  flew west.

Sunny, calm and very warm. Waders continue to be the main feature of recent days. A flock of 26 Common Sandpipers on the shoreline at 6.15 am was exceptional but they soon moved on. Another three were seen on the beach later. A flock of 33 Redshanks that flew west at 7.48 am was also unexpected. Other waders included a Lapwing, three Dunlins and seven Whimbrels west and nine Ringed Plovers and 16 Turnstones on the beach. Two Arctic Skuas (our first of the year) were chasing terns off shore then drifted east. Two Common Terns and one of two adult Great Black-backed Gulls was an old favourite (34G), rung as a pullus at Le Havre in 2010, and an occasional visitor to our shores. Two Yellow Wagtails flew west and a Chiffchaff was calling by the Obs.

Sunny with a light westerly wind. Waders included a Little Ringed Plover flying west (new for the year), six Ringed Plovers (including two juveniles), and five Turnstones in full breeding plumage on the beach. There were nine  Oystercatchers west, and another eight on the beach, one Curlew flew west and five Whimbrel on the tidal ponds which also flew off west.  Five Common Scoters flew east, one Common Tern flew west and a juvenile Peregrine flew west. 90 Swifts, four Sand Martins and 20 Swallows flew west.

A good day for insects with ten butterflies including our first Brown Argus near the skate park, our only Narrow-bordered Five-spot Burnet Moth (worn and bleached) and an Emperor Dragonfly. 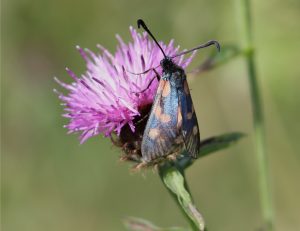 Cloudy then sunny with a light SW wind. Four Turnstones which flew west were the first seen since May.  Eight Lapwings and single Whimbrel and Curlew also flew west  and an Oystercatcher and a Redshank were on the beach. Another increase in waders seen.  Otherwise, it was very quiet; two Stock Doves dropped onto the beach and, later, one was on the water’s edge of the Marsh Pool and 12 Swifts flew west.

At the Obs, a family party of Weasels showed briefly as they crossed the path and insects included a Blood-vein moth, an unusual green Roesel’s Bush Cricket and another Marbled White butterfly. 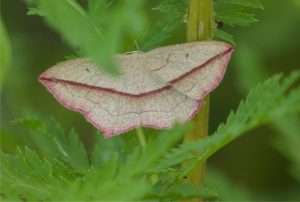 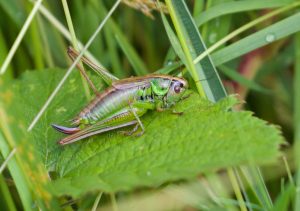 The large buddlea at the scout hut, that held out much promise in attracting butterflies, was cut down this morning.

Cloudy with a light SW wind. Two Oystercatchers flew west along the beach, a party of five Whimbrels flew west, later another was resting on the tidal ponds before also heading on west, and a Redshank on the beach was our first “returning” bird. A better wader turnout than of late! There was a gathering of 17 Mediterranean Gulls, including two juveniles, on the beach. Seven Swifts flew west and a Lesser Whitethroat along the middle brook was the first since only two records of this species during the Spring. Up to now, it has been a regular breeding bird.

An Essex Skipper was seen in the grassland by the coastal path. 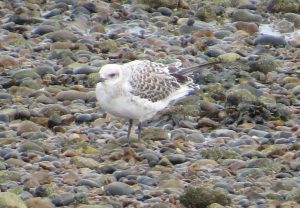 Sunny and very warm with a light southerly wind. A Gannet flew east, there were three Little Egrets on the tidal ponds and five Mediterranean Gulls on the beach. One Swift, 20 Swallows and a Sand Martin flew west. Late morning the gulls were up, chasing flying ants, amongst which were some Mediterranean Gulls and a second calendar year Common Gull (our first since May) and a Hobby.

A good day for butterflies with at least three Marbled Whites (unprecedented), another Ringlet and a Peacock on the Scout hut buddlea* which is, at the moment, being allowed to flower. 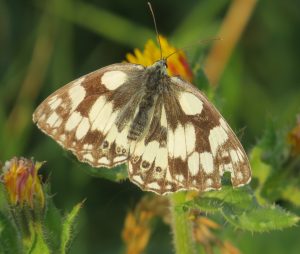 Cloudy with a light NE wind. One Gannet flew west and large juvenile female Peregrine flew west over the beach.

Butterflies included good views of a Ringlet at the Obs. 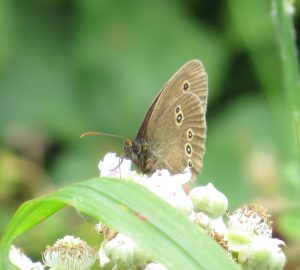 A good day for butterflies with 12 species recorded. These included our first Essex Skipper and a Ringlet (recorded a few times last year but only one two occasions in earlier years). The total for the year is now 20 species. The most likely additions would be Small Tortoiseshell, Small Copper and Clouded Yellow.

Cloudy, light NE wind and cooler. There were five Little Egrets on the Marsh Pool early morning. The second brood of seven Mallard ducklings were in the brook. Large but with no primaries as yet. Three Mediterranean Gulls flew east and four Sandwich Terns included two juveniles. There were five Pied Wagtails on the football pitch. 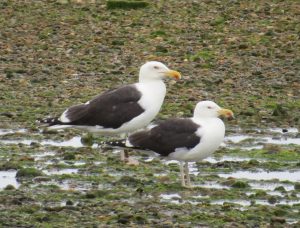 Sunny, light westerly wind, warm. Three Little Egrets on the Marsh Pool flew onto the beach where they were joined by a fourth. There were four Oystercatchers  and five Mediterranean Gulls on the beach and also an influx of Black-headed Gulls with 114 together on the beach. Five Swifts, two Sand Martins, five Swallows and two Yellow Wagtails flew west.

Butterflies included a Green-veined White (not seen for some time, a Comma and another Marbled White.

Sunny, calm and warm. 12 Lapwings flew west and a Greenshank was heard calling over the tidal ponds. There were four Pied Wagtails on the football pitch. On an evening visit, Andy had a Common Sandpiper on the Marsh Pool at 7 pm which Arnie confirmed was still present at 9.15 pm (not many of our records come that late in the day!).

Again a good showing of butterflies, including more Painted Ladies, but again no additions to the year list. 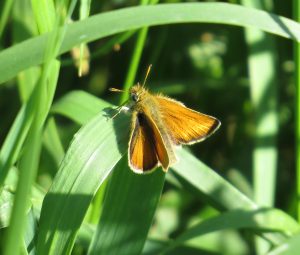 Sunny with a light northerly wind. There were three Mute Swans on the sea off the Tankerton slopes early morning. One Oystercatcher was on the beach and two Whimbrels and two Curlews flew west. A female Pied Wagtail on the tideline seaweed was feeding a fledged youngster. A Grey Wagtail dropped into the brook by the sewage works entrance, four Long-tailed Tits were by the entrance and a Chiffchaff was seen along the east bank.

Seven species of butterfly were seen on this warm day but there were no additions to the year list.

Andy had nothing to report from the bird world but a Marbled White was our first of the year (18th species), Gatekeeper was also seen and a Marsh Frog  was calling along Coot Strait (only a couple of previous records).

A good start for butterflies with nine species including our first Comma of the year and 17th species. A Banded Demoiselle was seen briefly along the middle brook. There has been only a handful of records here. 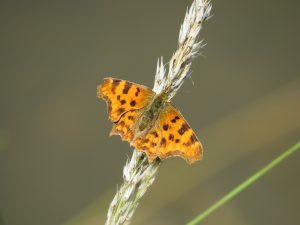