The total of 73 species for the month was well below the ten-year average of 77.2 as it petered out amidst a succession of storms. There were highlights, in particular on “Super Saturday” when Black-tailed Godwit and Spotted Redshank were added to the year list, a Red-necked Grebe made a second appearance of the year and the male Bullfinch showed up again. The total number of species seen here in all of the previous ten years, i.e the regulars, is 122. So far this year 12 species not on that list have been seen but January’s Slavonian Grebe remains the only species seen this year but not last.

Arnie noted 24 Redshanks roosting on the Marsh Pool where there was also a single Turnstone. A Sparrowhawk was also seen.

Sunny with a strong WNW wind. Singles of  Red-throated Diver and Great Crested Grebe were seen offshore, there were seven Red-breasted Mergansers  offshore whilst a redhead Goosander flew west, failing to disguise itself as just another Merganser. There were 18 Redshanks on the Marsh Pool, an adult Mediterranean Gull flew west and there were two adult Lesser Black-backed Gulls (becoming more regular now). Two Stock Doves flew west over the Obs, there were two Long-tailed Tits in the Elm Wood where the “dark-bellied” Great Tit showed again briefly.

Another quiet day; a Marsh Harrier and three Shelducks flew west. The three Stonechats were still present, two Skylarks, a few Meadow Pipits and a Reed Bunting were seen with a Chiffchaff by the sewage works entrance.

Andy managed to get photos of the striking “black-breasted” Great Tit fist seen by Arnie on the 3rd. It seems to be faithful to the Elm Wood and thereabouts. 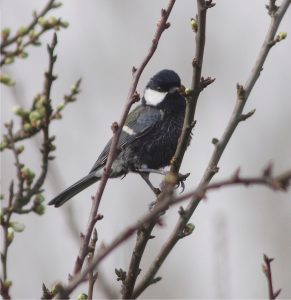 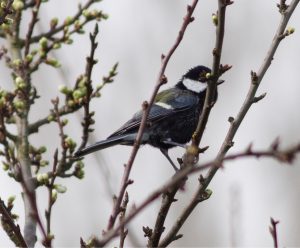 Cloudy with strong SW wind and mild. The weather was similar to that on Saturday, the birding wasn’t! Two Great Crested Grebes and three Red-breasted Mergansers were seen offshore, there were only five Brent Geese on the beach. Flocks of 25 and 30 Golden Plovers flew west low over the sea. Other birds included two Meadow Pipits in the grassland and ten roaming Linnets.

Cloudy with a strong SW wind. Not much expected in this weather but we have to make the effort. The first dent in our pessimistic wall came with a Black-tailed Godwit which rested briefly on the beach before the inevitable appearance of a dog walker had it flying off west. The second came with the latest showing of the male Bullfinch; it was heard calling along the east bank and then flew out towards the scout hut and beyond; first seen on December 5th but only about half a dozen times since. The third was a Red-necked Grebe spotted close inshore by the shingle ridge but which soon followed the godwit heading west. This is the third sighting of this species this winter. The others were on November 15th and January 8th; too far apart surely to be the same bird? And finally, a Spotted Redshank was seen  high over the sea, it circled round calling looking for somewhere to land,  but then followed godwit and grebe heading west. There was little else; a few Red-throated Divers in flight, a group of seven Red-breasted Mergansers offshore and two adult Mediterranean Gulls during the morning.  Other birds included 46 Dunlin feeding on the Hampton flats, a Skylark flying west low over the sea and two Meadow Pipits west over the Obs and three Stonechats.

Today’s lesson is that a combined 46 years of experience on this site is not enough to predict events on any day except to say that you have to be there to see it!

Cloudy with a freshening SW wind. A few Red-throated Divers and Great Crested Grebes offshore but only one drake  Red-breasted Merganser seen in the choppy conditions. There were c100 Brent Geese on the beach and waders included c40 Sanderlings on the beach, 18 Ringed Plovers and 24 Dunlin roosting between the groynes and the now lone Lapwing on the Marsh Pool. Three adult Lesser Black-backed Gulls flew west. Highlight of the morning was a group of three Ravens which flew west at 9.40 am; only our fourth record but three of these have been in the last 14 months. Other birds included the male Kingfisher, a Chiffchaff  calling in the Elm Wood, two Long-tailed Tits at the Obs and 12 Linnets by the scout hut. 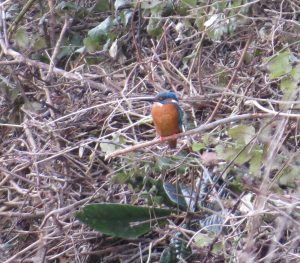 A flock of five Stock Doves and a single bird flew west. Two Skylarks flew over and only one Lapwing remained on the Marsh Pool.

Another Stock Dove, a Chiffchaff at the Obs and a Mediterranean Gull.

A redhead Goosander was flushed from the brook near the Marsh Pool by  a dog!

Sunny with a light SW wind. A calm day in between storms Ciara and Dennis. There were 13 Red-breasted Mergansers offshore but only c30 Brent Geese on the beach. Bird of the day was a Red Kite which flew west offshore  at 11.55 am. New for the year, and unusual in the winter months, although birds were also reported from Worth Marshes and Sevenscore that day. Little else to report but a Chiffchaff was on the edge of the Scout Wood and two Greenfinches were along the upper brook; both species now being recorded regularly again.

Sunny with a fresh SW wind.  Three Shelducks and a duck Pintail flew west and there were five Red-breasted Mergansers offshore.  An adult Lesser Black-backed Gull flew west. A Stock Dove which flew west low over the scrub was our first of the year. Also noted were Kingfisher, Stonechat, two Chiffchaffs and ten Linnets. 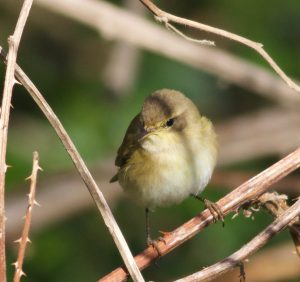 Andy’s reward for his refurbishment activities at the Obs was a good view of our resident, but elusive, Firecrest.

Sunny and mild with a fresh SW wind. A Great Northern Diver flew west and a Gannet flew east. There were five Red-breasted Mergansers offshore, waders included 66 Sanderlings and an adult Mediterranean Gull flying west along the beach settled on the Marsh Pool  amongst the Black-headed and Common Gulls. Scarce so far this year, a Jackdaw flew east over the scout hut, a flock of 20 Goldfinches flew along the east bank and there were ten Linnets.

Sunny with a light SW wind. There were 23 Great Crested Grebes offshore. A Great Northern Diver flew off west, there were three Wigeon lingering close inshore, nine Red-breasted Mergansers offshore and c100 Brent Geese on the beach. Other birds included a Kingfisher, three Stonechats (two males and a female) along the coastal path, a Chiffchaff calling in the Elm Wood and six Linnets which included one singing on the beach between the groynes at the eastern end.

A Water Vole swam across the middle brook. 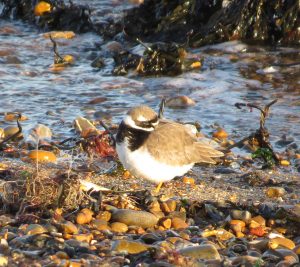 Sunny, calm with a light frost. The Great Northern Diver was off the eastern end of the beach. Two Shelducks flew west, two Common Scoters flew east and there were 14 Red-breasted Mergansers offshore. Waders included 132 Sanderlings on the beach on the outgoing tide and 22  Redshanks roosting on the Marsh Pool. Other birds included a Skylark calling but unseen as it flew west, a female Blackcap in the Elm Wood, 45 Carrion Crows on the shingle ridge at high tide, a Greenfinch “wheezing” in the trees along the upper brook and a male Reed Bunting in the grassland.

Sunny periods with a light NW wind.  A Great Northern Diver lingered off the Obs, two Shelducks flew west and a flock of 20 Common Scoters flew east. There were three Blackaps, two males and a female in the Elm Wood (an unusually large nunber for winter here) and, finally, three Greenfinches along the east bank and the upper brook were the first this year. They should be regular from now on. 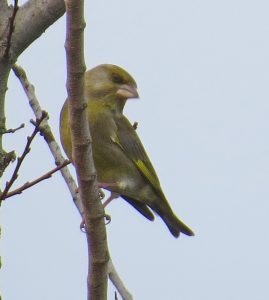 Sunny and mild with a moderate SW wind. There were 120 Brent Geese on the beach, about ten Gannets and a Shelduck flew west and there were five Red-breasted Mergansers offshore. Waders included a record count of 141 Sanderlings on the beach, 39 Ringed Plovers on the beach,  40 Golden Plovers flying west and eight Snipe flushed from the Marsh Pool (dog walker). The Water Rail was seen along the middle brook. A Skylark flying west by the Obs was our first of the year. A Firecrest showed well in the Elm Wood and a Grey Wagtail appeared by the Obs.

Sunny and mild (10-12.5 degrees C), with a moderate westerly wind. Two Red-throated Divers, five Great Crested Grebes and only one drake Red-breasted Merganser noted offshore. Waders included 42 Sanderlings on the beach, the three Lapwings on the Marsh Pool and a single Golden Plover flying west over the sea. Two Little Grebes were in the brook below the sluice. Other birds included a Kingfisher, a male Stonechat, four Long-tailed Tits, 25 Goldfinches, four Linnets and a female Reed Bunting.

A modest 41 species to start the month.