A total of 83 species recorded during the month was a little below the average for the previous ten years of 84.3. However, it was a very quiet month. Additions to the year list were all expected; a Little Tern on 1st, Reed Warbler on 7th (with another two later in the month), a Turtle Dove on 16th and a rather late Garden Warbler on 30th.  The most surprising bird of the month was the Pied Crow on 13th, which paid us a visit whilst vacationing on Thanet, and is now apparently residing in the Netherlands. Time will tell how significant this was, perhaps. Also unusual was a Kingfisher on 23rd which is rarely seen here during the breeding season.

Cloudy with a light westerly wind. A very quiet end to the month with two Shelducks and a second calendar year Mediterranean Gull flying west.

Arnie managed to find our first Garden Warbler of the year. Unusually late for Spring passage.

Sunny periods and a light SE wind. 15 Gannets and one Shelduck flew east and a Grey Heron flew south over the area. Six Swallows flew west.

Sunny at times with a moderate westerly wind. There was one Great Crested Grebe offshore and a Fulmar and a Gannet flew west. Looking beyond the estate, a Buzzard and a Hobby were seen. Eight Great Black-backed Gulls on the beach included two adults. A single Swift (still very scarce) and one Sand Martin, 16 Swallows, four House Martins and a Yellow Wagtail flew west. A Reed Warbler in song along the east bank was our third of the Spring.

A good turn out for the butterflies with Small White, Holly Blue, Speckled Wood, Orange-tip and our first Red Admiral since February!

Sunny at times with the occasional shower, and a light NW wind. A Great Crested Grebe was offshore, a Fulmar and eight Gannets flew west as did a party of eight Little Egrets (at 5.53 am) with four on the beach later that morning. An immature drake Eider offshore mid-morning proved not to be the one seen off Castle Coote in previous days as that was still there! Two Common Sandpipers circled high over the Marsh Pool before flying on west. A Stock Dove perched on a TV aerial along Long Rock was unusual. A Skylark flew west calling (also over Long Rock) and vis mig included two Swifts, eight Swallows and a Yellow Wagtail (all west, of course).

Sunny, warm with a light northerly wind. One Great Crested Grebe was on the sea, one Gannet flew west and four Little Egrets included three on the Marsh Pool. Three Common Sandpipers on the beach was the first multiple sighting of the Spring. Three Sand Martins and a Swift flew west. Two Moorhens were in the brook by the sluice. A Kingfisher was seen near the Marsh Pool – very unusual here in the height of their breeding season. 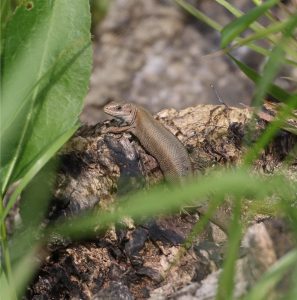 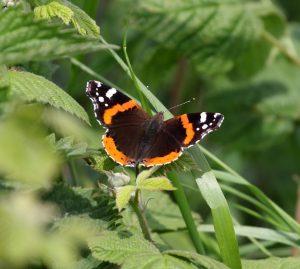 Sunny, warmer with a light northerly wind. A group of four Whimbrels flew west. Five Swallows and a Yellow Wagtail flew west. A Reed Warbler singing in the bushes along the upper brook was our second of the Spring. 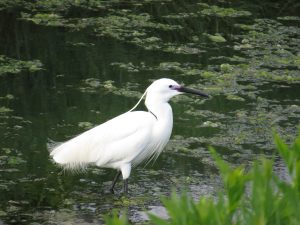 An unusual record of a California Quail seen, heard and photographed by Karen Munt at a house adjacent to the Seaview Caravan Park. 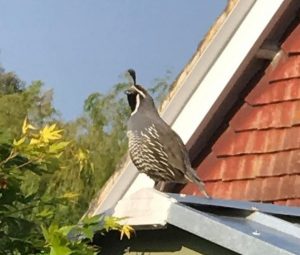 Sunny periods with a light northerly wind. Two Gannets flew east and the only waders noted were three Oystercatchers and a Turnstone.  One Swift, 18 Swallows and two Rooks flew west. A day to forget! 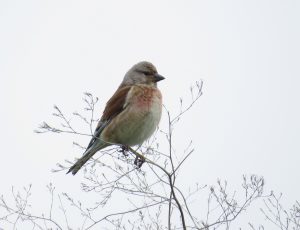 Cloudy with some light showers, moderate NE wind. 23 Gannets flew east and a Peregrine flew south over the football pitch. Waders included a Grey Plover in partial summer plumage and a female Bar-tailed Godwit on the beach and a Greenshank heard calling.  There were three Common Terns offshore and three Swifts flew east. 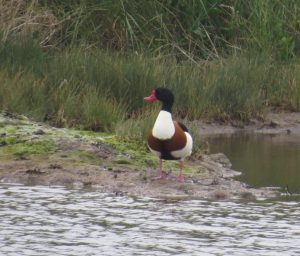 Andy saw and heard a Turtle Dove in the sewage works; a brief view but an addition to the year list. A Common Sandpiper was in the Marsh Pool, an adult Kittiwake flew east and there was a trickle of Swallows on the move.

Sunny with a light NE wind and warmer. 14 Gannets flew west and eight flew east. About 30 Swallows flew west and a single Sand Martin and two House Martins were also seen and a Yellow Wagtail heard. A Chiffchaff singing along the east bank was the first heard this month (has it just been quiet?).

Sunny with a moderate easterly wind. It seemed that a Moorhen in the brook by the sewage works entrance was going to be the bird of the day. It was only the third record of the year for this regular breeding species last seen on 24th March. However, at about 8.35 am, the infamous Pied Crow flew by the Obs (Geoff Burton) and headed SE over the scrub (Andy Taylor and Philip Hurst). Just to make sure it was noticed it repeated the process half an hour later (when it was also seen by Greg Herne). The most recent sighting had been that morning at Foreness (reported by Barry Hunt at 7.26 am). A Common Sandpiper on the beach by the skate park was only our third record of the Spring.

A Brimstone butterfly flew by the Obs.

Despite the birds absence, the Pied Crow engendered a bit of a twitch with the first site record of Andrew Lipczynski as well as Rob Stokes and another, easily recognised but nameless, birder. The following afternoon, the crow was back on Thanet and a local shop owner in Ramsgate was asking on twitter” is it normal for a crow to have white feathers as well as black ones”.  Over the next few days at least, the bird showed well in various locations on Thanet and was enjoyed by many birders. We were very grateful that it had  taken time out to visit us at our modest establishment. 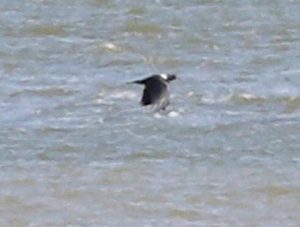 Sunny periods with a light northerly wind. There was one Great Crested Grebe on the sea, three Gannets and five Shelducks flew west and nine Common Scoters and a Great Skua flew east. Waders were  two Oystercatchers, a Greenshank flying west and only one single Turnstone but also a single Ringed Plover, Sanderling and Dunlin appeared together briefly on the beach by the Obs. The duck Mallard with eight ducklings was in the brook and six Great Black-backed Gulls (including two adults) were on the beach. Vis mig included one Swift, one Hobby and 33 Swallows west,  two Yellow Wagtails (one of which rested on the beach) and a Jay flew east. 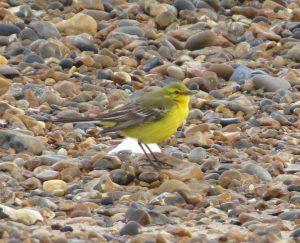 Sunny at times and calm. One Gannet flew east and a female Marsh Harrier flew west at 9.15 am. A Great Skua landed close inshore by the Obs before settling on the sea more distantly. A male Cuckoo came in over the estate, over the Marsh Pool and along the beach before settling in the corner of the sewage works where it called briefly (our second record of the year). Vis mig included five Swifts, one Sand Martin, 30 Swallows, one House Martin and three Yellow Wagtails. A Meadow Pipit was still singing,  from a bush along the coastal path, a Lesser Whitethroat was seen briefly in the Elm Wood, there were 78 Carrion Crows on the beach and the first two juvenile Starlings (a few days earlier than usual) were on the football pitch.

Andy popped down in the afternoon. Six Gannets flew east and a male Bar-tailed Godwit flew west. Vis mig included 30 Swifts and 30 House Martins and a steadly trickle of Swallows.

Sunny at times and calm.

Arnie found our first Reed Warbler of the year singing along the east bank.

Sunny periods with a light to moderate NW wind and cool. One Shelduck flew west, with a pair on the Marsh Pool, one Common Scoter and a Whimbrel flew west and a Great Skua, heading west, landed on the sea. There were three Dunlin and seven Turnstones on the beach at high tide and the Redshank was on the Marsh Pool (present since 29th April). Vis mig included 25 Swallows, five House Martins, one Sand Martin and ten Yellow Wagtails. A male Wheatear was on the beach and the shingle ridge and a male Great Spotted Woodpecker was in the churchyard. A Lesser Whitethroat was singing in the scrub by Lang Court and, later, it or naother appeared by the Obs. The Meadow Pipit was in song flight in the grassland again.

Butterflies seen were Small and Green-veined Whites and Orange-tip. 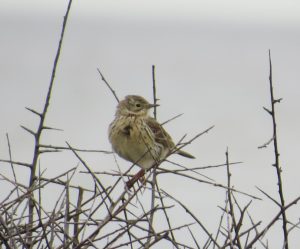 Sunny periods with a fresh northerly wind. It was cold! A Fulmar flew west and there were a pair of Shelducks on the beach. A female Bar-tailed Godwit was on the beach by the chalets and the Redshank was again on the Marsh Pool. Five Swifts, two House Martins and a Yellow Wagtail flew west. A Meadow Pipit was in display flight in the grassland.

Andy’s “quick evening circuit” produced one Hobby, a pair of Shelducks on the Marsh Pool and a handful of Swallows flying west.

Sunny at times, light to moderate NW wind, cold. Despite the cold, the westerly element to the wind sparked some more substantial vis mig; two Swifts, nine Sand Martins, 182 Swallows, 27 House Martins, 13 Yellow Wagtails, 16 Goldfinches and 14 Linnets flew west. Also on the move were two Fulmars, 73 Gannets, a Hobby, three Bar-tailed Godwits, a Whimbrel, two Curlews, two adult Mediterranean Gulls and an adult Kittiwake; all west.  Two flocks, each  of eight, Common Scoters flew east and there were 13 Turnstones on the beach and the Redshank continued in residence on the Marsh Pool.

Butterflies were Small and Green-veined Whites, Orange-tip and Speckled Wood.

Cloudy with a light NE wind. A single Great Crested Grebe and a Gannet flew east and a Greylag Goose flew west. Waders included two Whimbrels  that landed on the beach and 50 Turnstones. Highlight of the morning was a Little Tern fishing for a few minutes close inshore. New for the year and just about annual in recent years. There were also Sandwich Terns  and two Common Terns present all morning. There were five Great Black-backed Gulls on the tidal ponds. Also, 22 Swallows and a Yellow Wagtail flew west.

Small and Green-veined Whites were the only butterflies noted.