The total of 63 species for the month was lower than any of the previous ten years, in June, which had averaged 71.4 species. My own daily average of 34.4 species was also the lower than any of the previous ten years. Nothing was added to the year list but there were two Dunlin and two Avocets on the wader-friendly Marsh Pool at the beginning of the month, a Grey Plover mid-month and a trickle of Curlews, Whimbrels and Lapwings plus a Green Sandpiper towards the end of the month.  Things can only get better!

Sunny, moderate NW wind. Three Curlews, an adult Mediterranean Gull and a Common Tern (scarce this month) flew west and two more adult Mediterranean Gulls were on the beach. A movement of 53 Swifts during the morning and a Yellow Wagtail flew west.  A juvenile Moorhen was in the middle brook. There have been more Moorhen reports in recent weeks and, maybe, they have bred further upstream.

A Water Vole was seen in the middle brook. Again, reports can be months apart and it’s possible that these too are breeding further upstream. 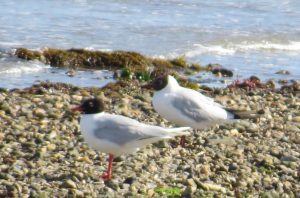 Sunny, calm and very warm. One Great Crested Grebe was on the sea, two Gannets flew east, a Shelduck flew west and two immature Mute Swans flew east, returning west shortly afterwards. A Grey Heron was being mobbed by gulls over the estate.

A Small Skipper and a Gatekeeper were the first of the year bringing the butterfly total to 16 species. A Silver Y moth was also seen and Greg Herne reported a Water Vole (the first for some time).

Andy’s brief visit to the site produced a pair of Hornet Moths on the same tree as they have been seen in the previous two years as well. 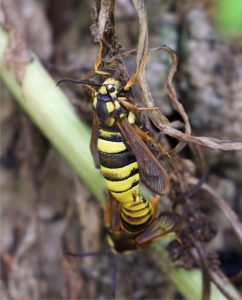 A Silver Y moth was seen in the grassland whilst a few Painted Ladies were the only butterflies to brave the conditions.

Sunny, warm and humid with a light SW wind. There was one Great Crested Grebe on the sea and four Gannets flew east. A Buzzard to the SE over Studd Hill, i.e the usual area, was the first of the month.

Sunny, warmer with a light SE wind. There was one Great Crested Grebe on the sea, two Gannets flew east and there were two Little Egrets on the beach. Two Lapwings and a Curlew flew west.

Cloudy with a light NW wind. There were five Little Egrets gathered together on the tideline early morning. A steady trickle of Swifts, c60, flew west whilst a Yellow Wagtail calling from the bushes opposite the Obs before flying on west was unusual here at this time.

One of a pair of Herring Gulls, with four well-grown young on a roof in Church Way, was sporting a Pitsea ring (not noted amongst the breeding birds here before).

The above average rainfall this month has reversed the usual decline in the water levels of the pools which  usually results in bone dry pools during the peak of the autumn wader migration. 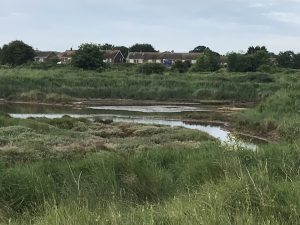 The Marsh Pool on 2nd June 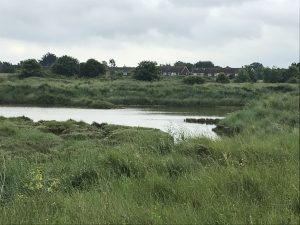 The Marsh Pool on 20th June

Cloudy with steady rain at first, light NW wind. Indications of a return passage of waders came in the form of a Curlew flying west, a Lapwing calling as it circled over the Obs and a Green Sandpiper calling but unseen a it passed west offshore.

A Large Skipper and a Red Admiral were at the Obs.

Sunny at first, clouding over, with a light SW wind. Six Little Egrets were on the beach, five Great Black-backed Gulls included two adults and one Sandwich Tern flew east. One Stock Dove flew south and a Reed Warbler, our fifth of the “Spring” was singing in the pear tree and the adjacent bluethroat bush. There were two broods of Mallard in the brook, one of seven almost fully-grown ducklings and another of at least five half-sized ducklings.

Ted Lee found a group of six Curlews on the beach. A typical record for this early returning migrant wader.

Waders are at their scarcest here at this time of the year and so it was pleasing for Ted Lee to find this Grey Plover on the beach. 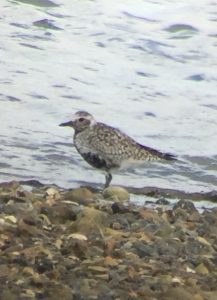 Sunny, then showers from 9 am, with a moderate SW wind. An adult Gannet flew east and a single Sandwich Tern was resting on the red buoy. 50 Swifts flew west, mainly during the showers (our highest count so far this year). A Stock Dove was seen near the Marsh Pool and a Skylark flew south over the sewage works.

Six species of butterfly were seen around the Obs including our first Large Skipper of the year, a Red Admiral and another Painted Lady.

The heavy machinery has gone. There are tracks on the shingle and, apparently, holes were being bored. Phase 2 next year, maybe. 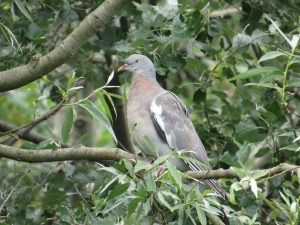 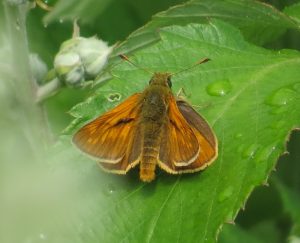 Sunny with a light SW wind. The struggle continues; a Hobby flew west low over the sewage works at 5.28 am, eight Oystercatchers were on the beach and a single Sandwich Tern flew east.  Sandwich Terns have been rather scarce this year. Usually there is an early morning movement of these terns (presumably from breeding grounds in the Medway) but not this year. What are the implications? Another scarce species has been the Swift and c20 feeding beyond the caravan park is one of the higher counts so far this year.

There have been a number of reports of Painted Ladies in the county and two more here today may suggest that it will be a good year.

Yesterday’s heavy rain has enabled the brook to pour its waters into the sea for the first time for months. Also, the recently dry Obs Pool now holds some water and the Marsh Pool is fuller. This may prove beneficial  for early returning Autumn waders.

Heavy machinery parked by the sluice may indicate that the work on replacing the sewage outfall pipe is about to begin. 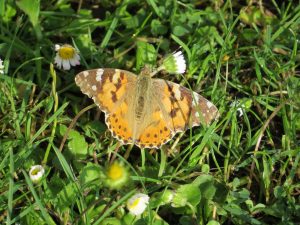 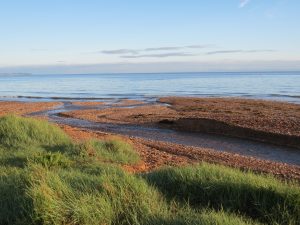 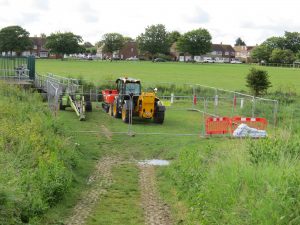 Cloudy with a fresh SW wind. It is a struggle to find anything to mention! There were eight immature Great Black-backed Gulls on the beach and two Sandwich Terns offshore. Two juvenile Robins were in the sewage works.

Sunny with a light SW wind. Little to report with four Oystercatchers on the tidal ponds (no other waders) and a second calendar year Mediterranean Gull west. 20 Swifts flew also west.

Better on the butterfly front with our first Painted Lady and Meadow Brown of the year amongst the six species seen. 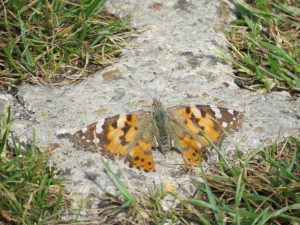 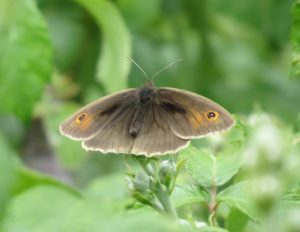 Sunny periods and a light SW wind. At 6.05 am, the calling of Avocets led to the sight of two dropping onto the Marsh Pool. Previously, all records of this species had been either on the beach or flying over. A first record for the Marsh Pool and probably only the third record here in June. However, after five minutes they took off and flew over towards the beach, returning to circle around over the pool  again before finally moving on. There was also a Shelduck  on the Marsh Pool. Two single Fulmars flew west, a Gannet flew west and another six settled on the sea. A little passage with ten Swifts, three Swallows and four House Martins west whilst a Chiffchaff,singing briefly at the Obs, was probably a resident which are quiet and elusive at this time in the season.

Two Dunlin on 1st and these two Avocets show the attraction of the Marsh Pool when the level is unusually low at this time of the year. A bit late for Spring migration and maybe it will have dried up before the Autumn passage gets going. 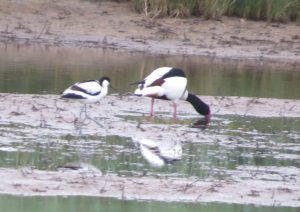 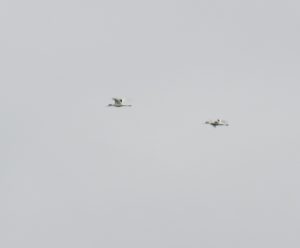 Sunny with a light westerly wind. There were two Little Egrets on the beach and a Grey Heron flew west. A small, but more than so far this year, movement of Swifts totalled 21 and there were also three Swallows and a single Sand Martin and House Martin.

A sunny and very warm start to the year with a light SE wind.  There were seven Little Egrets around the tidal ponds. Two Dunlin on the Marsh Pool mid-morning were unusual but the pool does look good for waders at the moment. It has been a very dry month. A Reed Warbler was singing in the depths of one of the scrubland bushes. Two juvenile Long-tailed Tits were in the trees along the upper brook. 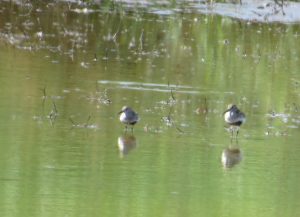