The total of 77 species for the month was well below the average for the previous ten years of 84 species. The coronavirus lockdown  imposed towards the end of the month was matched by a weather lockdown, cool with fresh northerly winds. Only five species were added during the month with Ring-necked Parakeet and Corn Bunting useful additions at the beginning but only two summer visitors, Wheatear and Sandwich Tern, seen before the weather put a block on things.

Another afternoon visit by Andy produced nothing “birdy” of note but a dead Lesser Spotted Dogfish.

The brisk NE wind meant that the weather had Long Rock in lockdown. Waders included two Sanderlings, 12 Redshanks and seven Turnstones. It was encouraging that the Meadow Pipit continues to display and the Reed Bunting to sing; both had been lost as breeding species in the last few years. Two Chiffchaffs were also noted.

Sunny with a moderate NE wind. There were four Red-throated Divers and three Great Crested Grebes offshore, two Shelducks flew east another west and waders included seven Sanderlings on the beach and a Snipe visible on the Marsh Pool. Two adult Mediterranean Gulls flew west over the area calling and a pair of Lesser Black-backed Gulls were on the beach. Otherwise, Meadow Pipit and Reed Bunting continue to hold territory and two Chiffchaffs were singing.

Sunny, frost, with a light SE wind. There were eight Red-throated Divers, five Great Crested Grebes and a drake Red-breasted Merganser offshore, two Greylag Geese flew west over the sewage works, three Shelducks flew west close inshore and a Fulmar flew east. There were eight Brent Geese on the beach. A brood of 11 Mallard ducklings were on the Marsh Pool and another brood of nine were along the middle brook near the wooden bridge. Recent experience has been that broods have not been seen this early in the season possibly because early attempts had been unsuccessful.  Wader numbers have, as would be expected, been in decline but included three Sanderlings on the beach.

There were seven Redshanks on the Marsh Pool and at least 12 Sanderlings on the beach. A female Blackcap and two or three Chiffchaffs were noted and the male Reed Bunting continued to hold territory.

Sunny, a touch of frost and a moderate easterly wind. One Red-throated Diver and two Shelducks flew west, the drake Eider was again by the tidal ponds, a pair of Red-breasted Mergansers were offshore and three Brent Geese dropped onto the beach. Waders included two Ringed Plovers and ten Sanderlings and a Bar-tailed Godwit. A pair of Lesser Black-backed Gulls displayed to each other on the beach. Other birds included two Chiffchaffs, four Greenfinches in trees along the east bank whilst Meadow Pipit and Reed Bunting are still holding territory.

Nine Ringed Plovers were noted on the beach and four drake Mallards were on the Marsh Pool.

Sunny with a fresh NE wind. One Great Crested Grebe could be seen offshore in the rough seas, the drake Eider was by the tidal ponds again,  and two drake Common Scoters and a large auk sp flew east. Waders included eight Sanderlings on the beach, nine Redshanks on the Marsh Pool and a Snipe dropped in to the pool.

Cloudy, early rain, and a fresh NE wind. A Fulmar flying west was only the second record of the year. Seven adult Gannets flew east, five Shelduck  and a flock of 50 Common Scoters and there were eight Red-breasted Mergansers offshore. Waders included only one Ringed Plover and 22 Sanderlings. Two Sandwich Terns flew east offshore (new for the year) and a second calendar year Mediterranean Gull flew SE across the area.

A Water Vole showed well as it swam along the side of the upper brook by the wooden bridge and dived into the bank.

Sunny and mild with a moderate westerly wind. There were five Great Crested Grebes and eight Red-breasted Mergansers were offshore whilst an adult Gannet flew west, a Greylag Goose flew east and an immature  Marsh Harrier flew west low over the sea at 11.15 am. Waders included seven Ringed Plovers and 22 Sanderlings on the beach and seven Redshanks on the Marsh Pool. Other birds included a Stock Dove west,  two Chiffchaffs were at the Obs and two Buzzards were circling to the SE.

The sun brought out the butterflies at the Obs with two Peacocks, a Small White and a Comma. 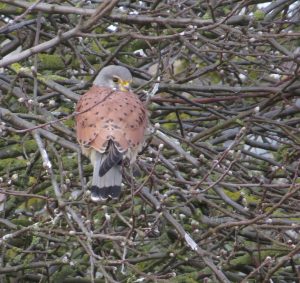 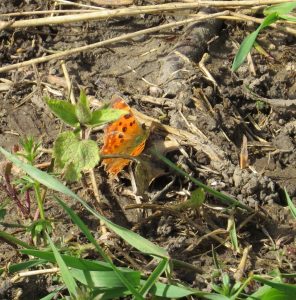 Sunny with a light westerly wind. There were two Red-throated Divers, ten Great Crested Grebes and a pair of Red-breasted Mergansers offshore. A drake Goosander and a Shelduck flew west and there were 14 Brent Geese on the beach. Waders included 29 Sanderlings and 44 Turnstones on the beach. Highlight of the day was a male Wheatear, found by Ted, and which showed for a few minutes on one of the bushes by the coastal path. New for the year, our earliest bird was on 15th March 2008 but this is the third year one has been recorded on this date. Other birds included a Stock Dove west over the football pitch, about ten Meadow Pipits, with one continuing to display in the grassland, three Chiffchaffs, five Jackdaws circling over the area and a female Reed Bunting in the bushes opposite the Obs.

The warmth of the sun brought out our first butterflies with at least three Peacocks, a Small White and a Brimstone. 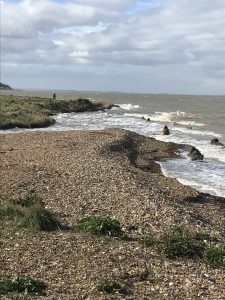 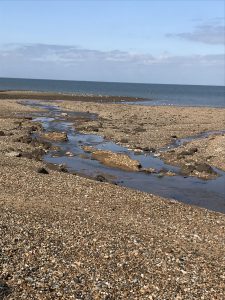 Where the brook meets the sea (high and low tide)

Cloudy with light rain showers and a light SE wind. There was a single breeding plumage Red-throated Diver,  five Great Crested Grebes and four Red-breasted Mergansers offshore, there were 30 Brent Geese on the beach, a Greylag Goose flew south by the Obs and a Shelduck flew west. A Marsh Harrier flew west in a cloud of gulls at 7.20 am and a Grey Plover by the tidal ponds was our first since January. Two Chiffchaffs were also noted.

The previous night a man took his dog for a walk along the prom by the caravan park. He fell off the prom onto the beach losing his car keys and glasses which, in the dark and without his glasses, he could not find. He made a mark on the wall to indicate where to look the next morning. It was raining then and the mark had washed away. Eventually though he did find them and was particularly relieved to have found his £600 glasses! However, he still supports Luton FC. Less lucky was a Spotted Dogfish found dead in the same area. 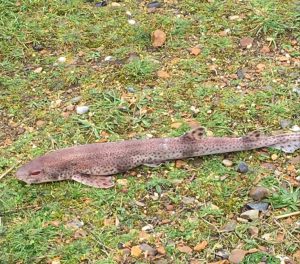 Sunny with a light SW wind. There were five Great Crested Grebes and four Red-breasted Mergansers offshore whilst the apparently local drake Eider flew west. There were 14 Brent Geese on the beach and a Lapwing came in from the east to rest on the beach by the Obs. The pair of Stonechats were noted, a male Blackcap was in the Elm Wood, a Chiffchaff  by the Obs and a Meadow Pipit was in song flight.

Sunny periods, calm then a light westerly wind. There were three Red-throated Divers, eight Great Crested Grebes and three Red-breasted Mergansers offshore. An adult drake Eider flew in from the west at 7 am and settled by the tidal ponds where it remained all morning. Three Greylag Geese and two Shelducks flew west and there were six Brent Geese on the beach. Waders included 14 Oystercatchers , one Ringed Plover, 52 Sanderlings and eight Dunlins at high tide and 21 Redshanks on the Marsh Pool. A Skylark was in song flight over the fields beyond the caravan park and two more flew west low over the sea. Two Stonechats were still present, an adult Rook flew west, there were six Linnets and a female Reed Bunting.

The flock of Red-breasted Mergansers numbered ten, there were about 20 Sanderlings, and two Skylarks were also noted.

Sunny with a moderate westerly wind. Two Red-throated Divers flew west, there were six Great Crested Grebes and a pair of Red-breasted Mergansers offshore and 33 Brent Geese on the beach. Waders included nine Ringed Plovers and 16 Sanderlings on the beach, a Snipe and 14 Redshanks on the Marsh Pool where there was also a Turnstone ( a single bird, presumably the same individual, is often seen on the pool. Other birds included two Stock Doves flew west , Kingfisher, a Meadow Pipit in song flight and two Reed Buntings.

Michael Lee of Bird Wise East Kent had set up his stall, unfortunately in rather windy conditions, and spoke to many local dog walkers during the morning. At one point, he was surrounded by 32 dogs and their owners. He seemed quite positive that his message of bird-friendly dog walking was well received. 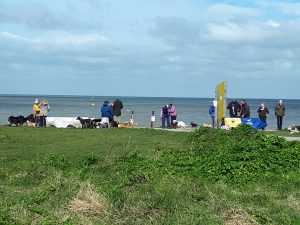 Sunny with a light SW wind and a touch of frost. Only a handful of Red-throated Divers had been seen during the morning until two jet skiers passed west a long way out and 44 were counted in flight! Three Shelducks flew west, six Common Scoters flew east and a single drake Red-breasted Merganser was on the sea. There were 67 Brent Geese on the beach and waders included a flock of 15 Golden Plovers flying west high over the sea, 16 Sanderlings, 40 Dunlin and six Ringed Plovers on the beach and 15 Redshanks on the Marsh Pool. An adult Mediterranean Gull flew west. Two Grey Wagtails were the first for over a month and presumably on passage. A Chiffchaff was in the Scout Wood and a Rook flew south by the Obs. 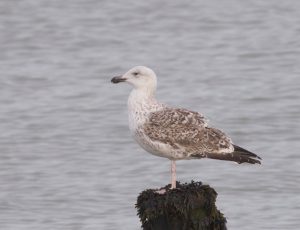 Cloudy with a fresh NE wind and rain from 9.30 am.  Even in the worst of conditions there is always the chance of a good bird. But not on this occasion! There were 53 Brent Geese and 19 Sanderlings on the beach.

Cloudy with a light SW wind. One Red-throated Diver flew west and there were ten Great Crested Grebes offshore.  There were 23 Brent Geese on the beach and three Grey Herons flew west.  A Ring-necked Parakeet flew east over the houses to the south of the scout hut. The three Stonechats were opposite the Obs and three Rooks flew west.

Eight Great Crested Grebes and five Red-breasted Mergansers were noted offshore. There were 67 Brent Geese on the beach and waders included 40+ Dunlins. Other birds noted included a Sparrowhawk, Mediterranean Gull, Kingfisher and a pair of Stonechats. However, birds of the day were a group of five Corn Buntings which appeared late morning in the bushes opposite the Obs. This species whose wintering flocks may have numbered c100 thirty years ago now, is now down to the occasional record usually of just a single bird. This group was the highest count here for over ten years. They flew off south towards Studd Hill. 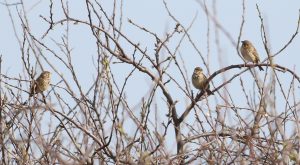 Cloudy and calm at first but with a freshening NW wind. Three Red-throated Divers and three Great Crested Grebes were offshore together with six Red-breasted Mergansers, that were joined mid-morning by our first Velvet Scoter of the year. This  soon flew off west.  One Shelduck flew west and there were  55 Brent Geese on the beach. Bird of the day, in terms if rarity if nothing else although we still enjoy seeing them here, was a pair of Ring-necked Parakeets in the churchyard. Unusually, they stayed for about 10-15 minutes with the male tenderly grooming its mate. Other birds noted included two Meadow Pipits, two Stonechats, a Jay and a female Reed Bunting. 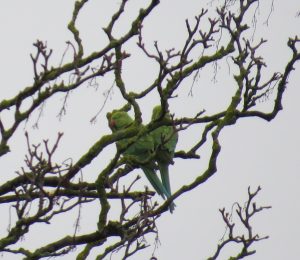 Sunny with a fresh SW wind. A quiet start to the month. Three Great Crested Grebes and two drake Red-breasted Mergansers were offshore. There were 65 Brent Geese on the beach. Other birds included an adult Lesser Black-backed Gull west and regulars such as the three Stonechats and a Kingfisher and three Greenfinches over the Obs. 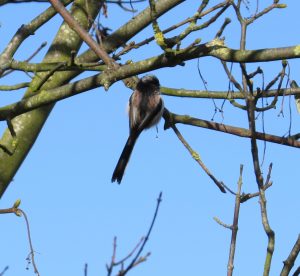