The total of 80 species was the lowest start to the year since 2014 and well below the average of 86.7 species over the previous ten years. Highlights, however, included only our second Glossy Ibis on 23rd. Other good birds were Shag on 2nd, a Purple Sandpiper on 5th and a Slavonian Grebe on 9th.

A sunny and calm morning. A line of 50 Red-throated Divers flew west and birds could be seen dotted all over the sea during the morning. There were also eight Great Crested Grebes offshore and two drake Common Scoters flew east. Waders on the beach included 32 Oystercatchers, 28 Sanderlings and 90 Dunlin whilst the five Lapwing were  still roosting on the Marsh Pool. A Great Spotted Woodpecker was calling in the Obs corner of the sewage works . The male Stonechat was present but the female has not been noted since 19th.

Cloudy, mild with a moderate SW wind. Another quiet day but there were two additions to the year list. Ted Lee enjoyed a private showing of a Kingfisher along the middle brook (not a coincidence that the brook is now flowing again) and there was a Guillemot offshore. Waders included 70 Golden Plovers flying west over the sea, 58 Sanderlings on the beach and five Lapwings and 18 Redshanks on the Marsh Pool. There were 124 Brent Geese close inshore. Other birds included a Grey Wagtail which flew into the sewage works and the male Stonechat. 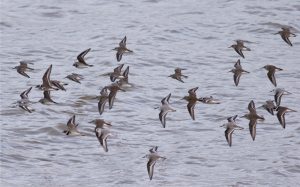 Yet another quiet morning, There were about a dozen Red-throated Divers and six Great Crested Grebes offshore and two female Common Scoters flew east. A Great Spotted Woodpecker was calling behind Lang Court, the male Stonechat was seen and a Greenfinch was in the trees along Swalecliffe Court Drive.

Ian Rendall reported an adult Mediterranean Gull on the beach.

Another quiet morning but with the surprise element this time. An immature male Marsh Harrier flew west low over the sea at 10.40 am. Our fourth so far this year. There were 25  Sanderlings on the beach by the Obs as the tide receded. One Skylark flew west, a Redwing was in trees by the scout hut and two Long-tailed Tits were in the churchyard.

Cloudy with a moderate SW wind. It was another quiet morning with a few Red-throated Divers and Great Crested Grebes offshore and also a single drake Red-breasted Merganser. A Gannet offshore was a belated addition to the year list. However, at 10 am, the perspective of the day changed when a Glossy Ibis flew west only metres in front of the Obs. Only our second record (the first was in October 2009) which it is safe to say we were not expecting! Will it be refound at Oare Marshes or on Sheppey? There was little else to note; another, or the same, Gannet flew east at midday and a Grey Wagtail showed well in the brook by the Brook Road bridge. 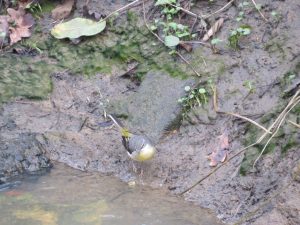 Sunny with a light NW wind. Four Mute Swans, three adults and an immature, flew west distantly out to sea and a male Great Spotted Woodpecker was in the Wood; two additions to the year list. About 35 Red-throated Divers were offshore, most moving west, and a drake Red-breasted Merganser was offshore. A flock of 210 Golden Plovers were on the beach. There were also 19 Sanderlings on the beach. There were also two Redwings in the churchyard.

A count of Turnstones between Long Rock and Hampton was carried out at the afternoon high tide. There were 168 birds and a Purple Sandpiper with them was, unfortunately, a 100 metres or so east of the site.

Ted Lee and Arnie van Orsouw were down today and reported a drake Red-breasted Merganser, a Goldcrest along the upper brook and the pair of Stonechats.

Sunny with a strong, but lessening, westerly wind. An immature male Marsh Harrier flew west at 8.50 am and a Great Northern Diver flew west close inshore at 9.05 am. Two small flocks of Pintail, ten birds in total, flew west; a new bird for the year and a Little Egret, which also flew west, was only the second this year.  Waders included 40 Oystercatchers roosting on the shingle ridge and 90 Dunlin roosting at the eastern end of the beach. A Skylark flew west over the beach, the Rock Pipit was on the Marsh Pool and a Redwing in the bushes along the east bank. 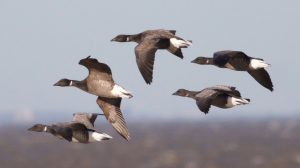 Sunny with a moderate SW wind. As the tide came in, waders on the beach included 33 Oystercatchers, 58 Ringed Plovers, one Grey Plover, 48 Sanderlings (our highest count so far this year) and 41 Dunlin. Flocks of Golden Plovers (c300 in total) flew west low the sea during the morning. It appeared that a large ship had disturbed distant and, up until then,  unseen Red-throated Divers, 82 were counted, and small numbers were seen  flying around, and pitching down,  for the rest of the morning. Two Wigeon flew west,  an adult Mediterranean Gull landed briefly on the beach and a female Teal was resting amongst the gulls and waders. Two new birds for the year were a single Skylark, which flew west over the shingle ridge, and two Greenfinches, which flew over the football pitch. Other birds seen included a Peregrine, two Jays and six Long-tailed Tits.

The brook is now blocked again save for a trickle leaching through the shingle at the eastern end of the beach. The water is high and very cloudy and this may help to explain the absence of Kingfishers for the last month, the total absence of Little Grebes this winter and the lack of any reports of Water Voles.

Sunny periods with a light SE wind. A quiet morning with our first Fulmar of the year flying east. Otherwise, there were a few Red-throated Divers and Great Crested Grebes and a drake Red-breasted Merganser offshore, a single Shelduck flew west and two first-winter Kittiwakes flew east. The Rock Pipit was again on the Marsh Pool and the pair of Stonechats continue to roam the grassland. Six Long-tailed Tits passed through the Obs.

Arnie van Orsouw visited today. Red-throated Divers and Great Crested Grebes were noted offshore. A Snipe was in the Marsh Pool and the pair of Stonechats were also noted.

Cloudy and calm with light rain and poor visibility. There were five Great Crested Grebes and a drake Red-breasted Merganser on the sea and 40 Brent Geese and a Grey Heron on the beach. The female Mandarin Duck was back on the Marsh Pool and two Grey Wagtails appeared briefly on the Obs Pool. The pair of Stonechats and the flock of 20 Linnets were also present.

An adult Mediterranean Gull on the beach was new for the year. There were also 20 Common Gulls there and, as the tide receded, 44 Sanderlings (the highest count this year). 70 Lapwings flew west low over the sea and there were another four on the Marsh Pool.

Cloudy, murky and calm with the wind turbines hidden from view.  Two drake Red-breasted Mergansers on the sea flew off west whilst a drake Common Scoter lingered offshore  all morning. Five Gadwall, which flew west over the tidal ponds, were new for the year, and other ducks in support were two Shelduck, six Wigeon, a Teal  and a pair of Mallard. A total of seven species of duck has not been attained often this winter. There were 22 Sanderlings on the beach. Other birds included the Rock Pipit along the mouth of the brook, two Goldcrests  in the churchyard  and six Redwings flying along the east bank and perching in trees behind the scout hut. Finally, a sub-adult male Marsh Harrier flew west over the Marsh Pool and the Obs at midday and a Slavonian Grebe made a late but timely appearance as it swam steadily westwards passed the Obs (only one recorded last year). A better than average day for Andy.

Cloudy with a light NE wind and colder. Three Barnacle Geese flew east over the sea at 8.50 am (a useful addition to the year list as this species has proved less than annual). The cold weather brought in a few winter thrushes; a Fieldfare was feeding with Blackbirds by the skate park and another two flew in off  the sea and over the Obs. A Redwing was in the bushes along the upper brook. Two Jays that flew from the sewage works to the Scout Wood were also an addition to the year list. Other birds, included 31 Sanderlings on the beach and a Rock Pipit on the Marsh Pool.

Cloudy with a light NE wind and colder. A few ducks were on the move with three Shelduck (two east, one west), seven Wigeon west and four Common Scoters east. The three Red-breasted Mergansers were again offshore and the female Mandarin Duck was on the Marsh Pool.  A Little Egret on the tidal ponds was the first of the year, an adult Kittiwake was offshore and a Great Skua flew west at 11.30 am. A Rock Pipit was on the shingle ridge and a Goldcrest along the middle brook. 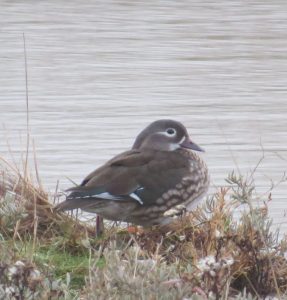 Cloudy, a light SW wind and showers. There were three Red-breasted Mergansers offshore, an immature male Marsh Harrier flew west over the sea at 10.40 am and 440 Golden Plovers were roosting on the beach. The duck Mandarin Duck was again on the Marsh Pool and a Rock Pipit was also there. A Goldcrest was seen along the east bank. On an afternoon visit, Andy Taylor found a Purple Sandpiper amongst the roosting waders at the east end of the beach which must have strayed from the Hampton “stronghold” of this species!

A Rock Pipit, seen by Arnie van Orsouw, was the first of the year, though it was probably the same bird that had been seen regularly in December.

Cloudy with a light SW wind and rain from late morning. A Shag flew west close inshore. Waders on the beach included 79 Ringed Plovers and 109 Dunlin and, on the Marsh Pool, there were three Lapwings and 14 Redshanks. The duck Mandarin Duck was also on the Marsh Pool.

Cloudy with a light SW wind and rain from 10.30 am. A quiet start to the year. There was a Great Northern Diver offshore, 18 Wigeon flew west and the duck Mandarin Duck was on the Marsh Pool. The pair of Stonechats were present and a Goldcrest was along the east bank. The total of 47 species compared with an average of 54 over the previous ten years.