The total of 74 species for the month was well below the average of 78.5 for the previous ten years but, given the unseasonal warm temperatures, perhaps not surprising. Nevertheless, there were 12 additions to the year list during the month which left us with 11 more species than at the same time last year. Bird of the month was the Glaucous Gull on 18th (our first for six years) and a Merlin was on 9th was also good to get.

Light cloud, a light SW wind and cooler. Three Gannets flew east, two Common Scoters flew west and a pair of Red-breasted Mergansers were offshore. Waders included 15 Sanderlings on the beach and three visible Snipe on the Marsh Pool. A Rock Pipit in the remnant brook, which showed signs of the Scandinavian littoralis race, was a new species for the year. Also, two Stock Doves flew west and a male Great Spotted Woodpecker was in the trees along the east bank.

Sunny, warm and calm, again! And quiet too, again! Only single Red-throated Diver and Great Crested Grebe on the sea and no sign of any Mergansers. There were c100 Brent Geese on the beach and three Snipe visible on the Marsh Pool. Other birds included a drumming Great Spotted Woodpecker and a Chiffchaff, both along the upper brook.

Whilst we await the first Spring migrants, we are losing winter visitors such as Stonechat (not seen since 21st) and the Lapwings on the Marsh Pool (last one seen on 18th). 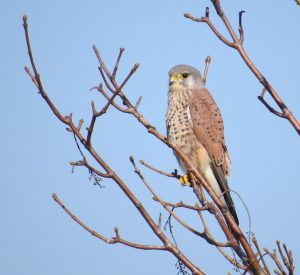 Sunny, warm and calm. A flock of 11 Red-breasted Mergansers (six drakes and five ducks) offshore was the highest count of the winter. Waders included one Grey Plover on the beach and one visible Snipe on the Marsh Pool. A Siskin, which flew east over the Obs, was our first this year. Other birds included a Kingfisher along the middle brook, a Skylark flying east over the sea and the Chiffchaff again at the Obs. 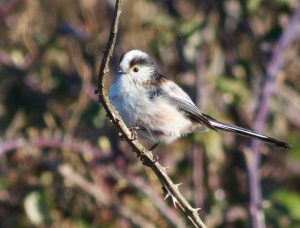 A brief visit by Andy who found a Canada Goose on the Marsh Pool.

Sunny and calm with a mist over the sea early morning. There were at least ten Great Crested Grebes and seven Red-breasted Mergansers offshore. There were 240 Brent Geese on the beach, two Shelducks flew west and two Little Egrets were on the tidal ponds. One adult Gannet flew east. Waders included one Grey Plover and 21 Sanderlings on the beach and one Snipe was visible on the Marsh Pool.It was quite a surprise to see a Water Rail in its favoured spot on a bend in the brook. Two had been seen first on 24th November with occasional sightings of one up to 7th January. Could it have remained hidden, not seen or heard,  for nearly seven weeks? It might seem unlikely but then, Moorhens, thought to be resident here, have only been seen once this year. A Chiffchaff, which sang sporadically, by the Obs was our first this year and a second bird was found on the eastern side of the sight. Other birds seen included a Kingfisher and our second Reed Bunting of the year, a female in the bushes opposite the Obs.

There was a frustrating glimpse of our first butterfly, which flitted by the Obs, but later Arnie saw a definite Red Admiral near the scout hut. 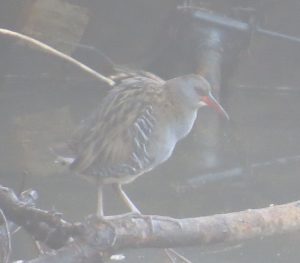 Sunny, mild with a light SW wind. A Fulmar flew east, a pair of Red-breasted Mergansers were on the sea and c200 Brent Geese were off the Tankerton slopes. A Grey Plover was on the beach and a Snipe was visible on the Marsh Pool. The female Stonechat was seen and a party of four Rooks flew south over the area.

Sunny, mild with a moderate SW wind. There were 120 Brent Geese on the beach, a drake Red-breasted Merganser on the sea and a Shelduck flew west. Waders included 29 Sanderlings on the beach and a Snipe but no Lapwings on the Marsh Pool. The male Stonechat was in the grassland and a pair of Long-tailed Tits were showing interest in the brambles opposite the Obs.

It was misty at first but another sunny, warm, calm day ensued. It started well for Andy when out of the mist there appeared a huge, ghostly white gull. The immature Glaucous Gull (probably third calendar year) was our first since 2013. It bathed on the beach for a while before flying off west.  The plumage details suggested this was the bird that had been present at Rainham Marshes recently and before that at Beddington Sewage Farm. A Fulmar flying east was also a new bird for the year. Eight Shelduck flew west and a single Lapwing remained on the Marsh Pool. Also seen were a Skylark, two Rooks, a Kingfisher and two Stonechats. 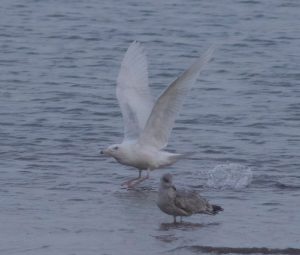 Sunny, mild with a light breeze (unseasonal). A quiet day for Andy whilst I was away. There were three Red-breasted Mergansers offshore and a total of 18 Shelducks flew west. There was only one Lapwing remaining on the Marsh Pool. Other birds included one Stock Dove flying west over the beach, a Kingfisher over the sluice, the pair of Stonechats, a displaying Greenfinch and a large female Sparrowhawk working the east bank.

Sunny with a light SW wind. A Great Northern Diver,  spotted by Ted, was drifting west close inshore early morning and there were c10 Great Crested Grebes offshore. Three Shelducks flew west. A Sparrowhawk was displaying distantly beyond the estate.

An  adult Black-headed Gull on the beach was displaying a colour-ring. It had been rung as a breeding adult in Poland on 25th May last year. It was still in Poland (some 85 kilometres from the nest site) on 31st July before being seen today at Swalecliffe (1172 kilometres further west).

Sunny with a light SW wind. There were 70 Brent Geese on the beach and waders included 35 Ringed Plovers, a Grey Plover and 25 Sanderlings on the beach and single Lapwing and Snipe on the Marsh Pool. Other birds included the female Kingfisher along the middle brook, one Skylark flying west, the male Stonechat, four Long-tailed Tits and three Greenfinches chasing each other in the airspace above the Obs.

Andy’s brief visit this morning added two Canada Geese  to the year list. There were also five Red-breasted Mergansers offshore and a Skylark was “half-heartedly” displaying.

Sunny , colder with a light NW wind. There were 110 Brent Geese on the beach and seven Shelducks flew east (another three flew west). An  adult Mediterranean Gull flew west and an immature Peregrine landed on the beach where it rested for some time. A Stock Dove and two Skylarks (new for the year) flew west and a Jay was seen along the upper brook and in the Elm Wood. 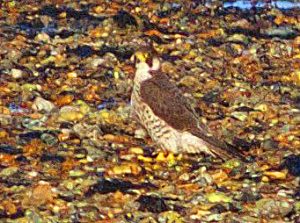 Sunny, mild with a strong westerly wind. A quiet morning was interrupted by a female Merlin which flew west low over the beach at 10.10 am; a new bird for the year and always good to see. There were 115 Brent Geese on the beach and waders included 37 roosting Ringed Plovers, 35 Sanderlings on the beach on the incoming tide and a Grey Plover flying west. An adult Mediterranean Gull was on the beach, a male Great Spotted Woodpecker was in trees along the upper brook and there were  26 Goldfinches along the east bank. 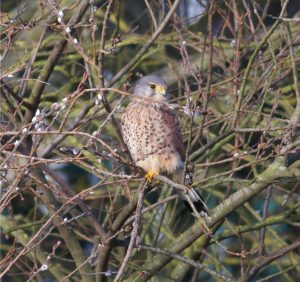 Sunny with a strong SW wind. Four Stock Doves flew west and a single Greylag Goose flew south inland; two additions to the year list. Two Shelducks flew west and waders included 49 Oystercatchers on the beach, 30 Lapwings flying west and 15 Sanderlings on the beach. An  adult Mediterranean Gull was along the shoreline. A Greenfinch was “wheezing” along the east bank.

Andy added a Reed Bunting to the year list. A regular breeding bird until the last few years and, with current levels of disturbance, sadly unlikely to return. There was also four Red-breasted Mergansers offshore and Arnie reported a Kingfisher by the Marsh Pool.

Cloudy, milder with a light southerly wind. There were four Red-breasted Mergansers offshore and, after being alerted by James Lowen, we saw a Great Northern Diver swimming close to Hampton Pier. Six Shelducks flew west, a Peregrine flew north over the caravan park heading for Hampton Pier and c60 Golden Plovers flew west over the sea. A Mediterranean Gull was on Hampton flats and a  Guillemot was close inshore on the sea. Also, a Grey Wagtail was seen.

Sunny and cold with a strong NW wind. Sea-watching failed to produce; an adult Gannet and two Kittiwakes flew east and five adult Lesser Black-backed Gulls flew west. There were two drake Red-breasted Mergansers offshore and waders included 90 Dunlin roosting on the shingle ridge at high tide. The highlight of the morning was, however, unexpected; a Mistle Thrush (scarce here nowadays) flew west by the Obs. Other birds included the pair of Stonechats sharing the Obs with us, two Rooks flying south over the area and seven Linnets near the scout hut.