The total of 84 species for the month was a little above the average over the last ten years but this did little to reduce the deficit. This is 16 species behind the end of March total last year and about ten behind the average over the last ten years.  The severe weather did produce our first Woodcocks for four years and other good birds were a Lapland Bunting on 20th (also our first for four years) and a lingering Black-throated Diver from 29th. The only Spring migrants were Chiffchaff and Sand Martin.

Sunny periods with a few light showers. Diver numbers built up as the tide came in this morning. Disturbance from  a police boat saw at least 45 Red-throated Divers in the air at one time. Other birds offshore included the Black-throated Diver and at least one Great Northern Diver. There was also an adult Shag in full breeding plumage which lingered offshore. Three Common Scoters flew east and a party of seven Red-breasted Mergansers flew west. Two Gannets flew east and c100 Cormorants had gathered offshore. An adult Little Gull also flew west close inshore. There were 20 Brent Geese on the beach and waders included eight Ringed Plovers, three Sanderlings and a Dunlin. A Little Egret,  a species apparently  badly effected by recent severe weather conditions, was in the remnant brook. Two Buzzards were soaring behind the estate.

Cloudy with a light easterly wind, cool. There was a raft of c150 Cormorants close inshore, 30 or more Red-throated Divers, one Great Northern Diver but no sign of yesterday’s Black-throated Diver.  Six Great Crested Grebes were offshore. A pairof Pintail flew east, four Common Scoters flew east, 11 flew west and two drakes and a duck were close inshore late morning. 19 Brent Geese were on the beach and 25 Redshanks were roosting on the Marsh Pool.

Sunny after a clear night with a touch of frost. Light southerly winds. The bird of the day was undoubtedly a Black-throated Diver which, unusually for this species here, showed well close inshore. There were also two Great Northern Divers and c15 Red-throated Divers, a  Great Crested Grebe and four Red-breasted Mergansers offshore. Also, 21 Brent Geese are still lingering on the beach and waders included 18 Sanderlings and 140 Turnstones roosting at high tide, but only one Ringed Plover and a few Dunlin, and 14 Redshanks roosting on the Marsh Pool. An immature Peregrine flew east along the beach, a Buzzard appeared low over the estate and a Jay flying towards the sewage works was the first for some time.  However, we are still waiting for Spring!

Cloudy with steady light rain all morning. Two Great Northern Divers were present offshore all morning at least three Red-throated Divers and three Great Crested Grebes. Three adult  Gannets flew west and another was sitting on the sea. One Grey Plover and 14 Sanderlings were on the beach and ten Redshanks were roosting on the Marsh Pool. A Moorhen, about ten feet up in the bushes along the east bank, was fending off the attentions of two Magpies. They pursued the bird into the trees by the sewage works.

Sunny periods, a fresh NW wind and cool. A Great Northern Diver and a pair of Red-breasted Mergansers were offshore. Ten Greylag Geese and eight drake Common Scoters flew east. There were 32 Redshanks on an undisturbed Marsh Pool and a single Snipe was also in view. Three Buzzards and two Sparrowhawks were circling over the estate late morning. Two Sand Martins flew west at 10.50 am; a new bird for the year. Four alba Wagtails, probably of the nominate race, and a Reed Bunting also flew west.

Cloudy and calm. There were 18 Red-throated Divers offshore, a Great Northern Diver was the first seen this month and two summer plumage Black-throated Divers flying west were new for the year.  Two Canada Geese flying west over the beach were also new for the year, five Shelduck flew west and single Fulmar and Gannet flew east.  Three Red-breasted Mergansers (two drakes and a duck) were offshore and a female Marsh Harrier flew west then headed inland. There were three Great Spotted Woodpeckers (two males and a female) were seen and there were two Chiffchaffs along the east bank.

Cloudy with a moderate SW wind. Six Red-throated Divers, a Great Crested Grebe and two pairs of Red-breasted Mergansers  were offshore. There were 20 Brent Geese, three Snipe in the marsh and an adult Mediterranean Gull flew east.  A Great Spotted Woodpecker was again heard drumming along the upper brook and a pair of Long-tailed Tits were at the Obs.

Cloudy, light westerly wind, cool. There were four Red-throated Divers and a Great Crested Grebe offshore. Two Shelduck flew west and there were c40 Brent Geese. Waders included 22 Oystercatchers, one Grey Plover and three Sanderlings on the beach. Some vis.mig with 22 Meadow Pipits, 62 Redwings and two Reed Buntings (our first this year) flying west. Finally, a Great Spotted Woodpecker was drumming along the upper brook, a male Stonechat was in the scrub (the first since 10th, so possibly a migrant) and a Rock Pipit was at the mouth of the brook.

Sunny, feeling mild where sheltered from the fresh southerly wind. There were 12 Red-throated Divers and eight Red-breasted Mergansers on the sea, one Fulmar flew west and a Gannet flew east. There were 40 Brent Geese on the sea by the skate park.  Waders included 22 Redshanks on the Marsh Pool and our second sighting this year of a Purple Sandpiper (courtesy of Arnie) which had no doubt strayed from its Hampton base. One Skylark flew south and two Rooks flew east.

A Peacock butterfly was our second species this year.

There were 40+ Red-throated Divers offshore, some in partial or full breeding plumage, and ten Red-breasted Mergansers (seven drake and three ducks). Seven Shelduck and two Mediterranean Gulls, in breeding plumage, flew west.  A  Common Buzzard, which came in off the sea and continued south, was our first of the year and a Peregrine was seen several times during the morning. There were 13 Redshanks on the Marsh Pool (another 12 on the caravan park field) and five Snipe were flushed from the marsh. Also, two Skylarks flew west and there was a trickle of Meadow Pipit passage as well. One Meadow Pipit was in display flight.

A shortened visit in the steady drizzle, but with some heavier outbreaks of rain, and a fresh southerly wind. A Fulmar flew west and 12 adult Gannets flew east.  Three Red-breasted Mergansers (two drakes and a duck) were on the sea. A Little Egret in the brook was the first seen since the cold weather. There were 21 Redshanks on the caravan park field. A Rock Pipit on the beach was of the Scandinavian race, littoralis. 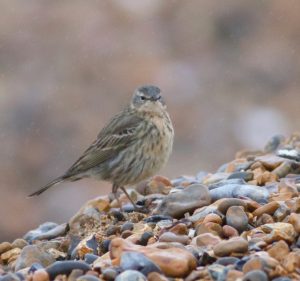 Cloudy, mild with a southerly wind. There were four Great Crested Grebes and three Red-breasted Mergansers offshore. One Fulmar and a breeding plumage adult Mediterranean Gull flew west, Waders included four Grey Plovers, 32 Sanderlings and 47 Dunlin and 26 Lapwings flew west. A male Stonechat was the first recorded since the cold weather; a survivor or a migrant?

Sunny periods with a cool westerly wind. There were six Great Crested Grebes on the sea but one feeding in the brook was exceptional. An adult Shag was on the sea,  two Shelduck flew west and another was on the Marsh Pool. Waders included 40+ Golden Plovers and 37 Lapwings flew west and five Grey Plovers were on the beach.  Also, there were two Mediterranean Gulls, a Stock Dove and four Skylarks flew west whilst another Skylark was in song beyond the caravan park.

Milder again with a light SE breeze. There were 22 Red-throated Divers. A Greylag Goose and two Shelduck flew west, two drake Teal, a drake Common Scoter and six Red-breasted Mergansers were on the sea. 12 Grey Plovers included seven flying west, 39 Lapwings were on the beach briefly with another eight on the Marsh Pool, 22 Sanderlings flew west and five Bar-tailed Godwits were on the Hampton flats. An adult Mediterranean Gull in breeding plumage flew west. A Stock Dove, which flew NW over the football pitch, was the first of the year (it has been a much scarcer bird here in recent years). Three  Skylarks headed inland, a Fieldfare and a Redwing were on the football pitch and an immature Rook was on the beach.

It was milder (i.e. not below freezing) for the first time for a week.  However, a species associated with the cold weather, Woodcock, appeared for the first time in four years when two were flushed by dogs from the shingle ridge. Other waders included four Grey Plovers and a Bar-tailed Godwits on the beach. Five Great Crested Grebes flew east, a Greylag Goose flew west and five Teal were offshore all morning.  Another Teal was on the Marsh Pool and there was another appearance by the  female Mandarin Duck which flew from the upper brook into the sewage works.  A flock of 12 Fieldfares flew west over the Obs (another was in the area all morning) and two Snow Buntings were seen in flight by the Obs.

Another freezing morning, cloudy with strong easterly winds and freezing rain that coated both clothing and optics (not like that at the Pak Thale salt plans as I watched my first ever Spoon-billed Sandpiper!) At least the conditions had some effect on the movement of birds; ducks included eight Red-breasted Mergansers flying west, a Wigeon on the Marsh Pool and also three Shelducks, two drake Pintail and two Teal. Most notable amongst the waders were 17 Bar-tailed Godwits where also there were six Grey Plovers and 188 Dunlin. A juvenile Kittiwake was also seen.

Andy took a brief walk around in the afternoon braving the strong easterly winds. Snow was lying on the ground and the brook was frozen. Most notable were 22 Little Gulls that flew east close inshore,  a Bar-tailed Godwit also flying east and also an addition to the year list and three Snow Buntings, seen by Jim Bloor, around the children’s play area. A Common Scoter flew east, 30 Brent Geese flew east and another eight were on the Marsh Pool.