The total of only 70 species recorded during the month was poor. It compares with an average of 78.2 over the previous ten years with a maximum total of 91 seen in 2012. Only three species were added during the month with Snow Buntings (a single on 10th and 13th and the flock of seven on 28th), the only notable addition. As a result, we are now a massive 13 species behind last year (seven at the end of January).

As I head off to warmer climes (Thailand), Andy has the opportunity to capitalise on the cold conditions. Will “the Beast from the East” bear fruit or is it just too late in the season? A good start with seven Snow Buntings appearing late morning (six flew off east) and 13 Pintail on the sea. Also 12 Teal were noted.

Sunny periods with snow showers in a light NE wind. A few inches of snow on the ground. Three Red-breasted Mergansers were offshore and a pair of Teal were in the brook. 30 Golden Plovers were resting on the shingle ridge and a Grey Plover, 16 Sanderlings and 59 Dunlin were on the beach. Away from the sea, seven Skylarks flew east, two Fieldfares dropped into the scrub and two Redwings flew west. A Rook,  circling over the caravan park and drifted north.  Some reaction to the cold weather without anything of great significance.

Cloudy, cold with a few snow flurries in a moderate NE wind. An adult Gannet flew east. There were 35 Brent Geese, 29 Ringed Plovers, a Grey Plover and 20 Sanderlings on the beach.

Sunny with a fresh easterly wind, very cold. A Great Northern Diver was offshore early morning and drifting east and there were 12 Red-breasted Mergansers on the sea. A pair of Shelduck circled close inshore by the Obs and a drake Teal flew west. A small improvement. There were also 16 Sanderlings on the beach and the lone Grey Plover. However, birds of the day were two immature Rooks which came in off the beach flying south over the sewage works; a typical time for the  first record of this mainly migrant species here.

Sunny, moderate to fresh NE wind and cold. There were 102 Brent Geese on the beach and a flock of seven Common Scoters flew east. Six Red-throated Divers and a Great Crested Grebe were offshore whilst waders included a Grey Plover and 12 Sanderlings again, there were two Lapwings on the Marsh Pool where a check found eight Snipe (the highest count for some time). The male Stonechat continues to show and four Greenfinches and ten Goldfinches were in the sewage works.

Cloudy, rather misty with a light to moderate NE wind and cold. The sea continues to be almost devoid of interest; three Red-throated Divers flew east, a Great Crested Grebe was offshore and a single Cormorant flew east. There were 29 Brent Geese on the beach whilst waders included a single Grey Plover and 12 Sanderlings. Only one Lapwing was roosting on the Marsh Pool. Other birds included the male Stonechat, two Long-tailed Tits and only one Linnet.

I was away in Reading (lots of Red Kites including a flock of 30, 3 Goosanders and a Red-crested Pochard) whilst Andy was busy constructing a model of Rutland Water in his garden. Andy did, however, manage to complete the East Kent Turnstone Survey count on 17th; 162 birds in the Swalecliffe-Hampton sector was again the highest of all the 22 sectors. He also managed to see a Gannet (only our third this year) and the wintering Rock Pipit. Ian Rendall saw a Kingfisher in the brook on 16th (only our third sighting this year).

Sunny with a freshening southerly wind. Only two Lapwings were roosting on the Marsh Pool. There were 32 Oystercatchers on the beach and a single Grey Plover was present. Three  Goldfinches were in the churchyard and ten Linnets on the shingle ridge. The quietest of quiet days but Ted found the Snow Bunting by the jetty at the e astern end of the beach. It is probably roaming between there and Hampton where it will be subject to much disturbance.

Sunny with a light SW wind. There were 20+ Red-throated Divers and two Great Crested Grebes offshore. There were 100 Brent Geese on the beach. The pair with two juveniles often seen grazing on the jetty were on the Marsh Pool for much of the morning. Also on the pool, there were ten Mallard, three Lapwings  and a Rock Pipit. 79 Dunlin  were roosting on the beach. A Greenfinch was in song in the sewage works and eight Linnets were on the shingle ridge.

10th – sunny with a light SW wind, cold. The highlight of the morning, and of the month so far, was our first Snow Bunting of the year on the beach between the groynes at the eastern end. Nine Red-throated Divers and a summer plumage Great Crested Grebe were offshore, a Fulmar and a Shelduck flew west and a drake Teal was just off the beach by the Obs. There were 16 Mallard and three Lapwings on the Marsh Pool. 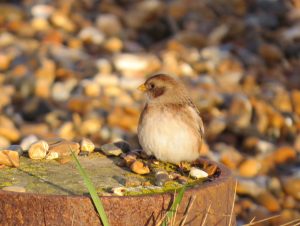 8th – sunny, light SW wind, cold. There were 11 Mallard again on the Marsh Pool but Lapwings were down to three individuals. There were 22 Sanderlings on the beach. Other birds included a Rock Pipit in the brook by the shingle ridge, the male Stonechat and a Jay in bushes along the upper brook.

5th – cloudy with an occasional snow shower, a moderate easterly wind and cold. Although the tide was low, the brook was blocked again and therefore murky and unmoving. Not good for the wildlife. There were 11 Mallard in the brook, an increase that often occurs with flooding. A pair of Red-breasted Mergansers flew east close inshore and a Peregrine flew east over the tidal ponds. There were 130 Golden Plovers on the beach. A group of 17 Sanderlings were feeding at low tide and a flock of 18 Linnets flew onto the shingle ridge.

3rd – cloudy, moderate SW wind, cold. There were 31 Red-throated Divers, three Great Crested Grebes and a Red-breasted Merganser noted offshore. Two Pintail flew west close inshore and a gaggle of eight Greylag Geese flew high east (and inland) at 12.33 pm. Two Grey Herons were on the tidal ponds and two Little Egrets (which have been scarce here since recent cold spells) were on the beach. There were 52 Oystercatchers on the beach. Other birds noted included a Great Spotted Woodpecker drumming in trees along the upper brook, a Skylark flying west, a Grey Wagtail, and the male Stonechat. 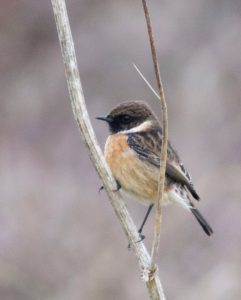 1st – cloudy with a moderate NW wind and cold. A new month with the same old struggle. However, four Greylag Geese, which flew west, were an addition to the year list. Waders included 42 Oystercatchers, 61 Ringed Plovers, eight Sanderlings and 80 Dunlin with the usual, but down one to  four, Lapwings on the Marsh Pool.  Other birds noted included a Kingfisher for the second time this year, the Rock Pipit in the brook behind the beach, a Grey Wagtail, the now single male Stonechat, a Fieldfare and a Redwing.