A total of 88 species for the month was (for the first time this year) above the average over the previous ten years. The year total of 107 is 13 more than the same time last year but that is very unlikely to be maintained. Early Spring migrants included Sand Martin, Swallow, Wheatear, Blackcap and Willow Warbler.

Cloudy and cold with a fresh NE wind. There was one Great Crested Grebe on the sea and one Fulmar, three Gannets, 29 Common Gulls and four large auk sp flew east. Waders included five Ringed Plovers, one Sanderling  and 34 Turnstones on the beach and three Redshanks on the Marsh Pool. There were also 115 Herring Gulls on the beach. A Willow Warbler was silently moving about in the bushes opposite the Obs.

Sunny with a light northerly wind. There were five Great Crested Grebes offshore , a Fulmar flew east and there were three Brent Geese on the beach. Our second Red Kite of the year circled over the estate, drifting west, at 8.40 am. Waders included just two Sanderlings on the beach, two Dunlin flying west and two Snipe on the Marsh Pool. More abundant were 57 Turnstones gathering on the outgoing tide.

The warmth and sun encouraged our first Brimstone butterflies on the wing with a male at the Obs, at the entrance to the sewage works and by Lang Court and a female by the scout hut. This species was recorded here for the first time only last year. A Peacock was also seen as it sped by the Obs. 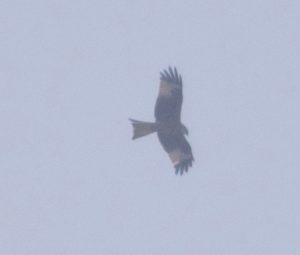 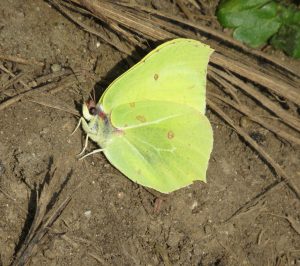 Cloudy with a light NW wind. There were three Red-throated Divers (including one in summer plumage) and five Great Crested Grebes offshore. A flock of 70 Brent Geese flying west offshore was a surprising number this late in the month (at this site anyway) and another three were on the beach as the tide receded. Four Shelducks and five Common Scoters flew west and two Greylag Geese flew east by the church. Waders included eight Sanderlings and six Redshanks on the beach. One Blackcap was singing in the churchyard and there were two Chiffchaffs along the east bank and at the Obs.

Sunny with a light NW wind and cool. A Red Kite flew west at 9.34 am. Other birds of prey included three Sparrowhawks and three Common Buzzards. There were three Great Crested Grebes offshore, one Red-throated Diver and five Common Scoters flew east and there were only six Brent Geese on the beach. Waders included two Lapwings flying east (unusual here in March), only one Sanderling and one visible Snipe On the Marsh Pool. There was another appearance by the wintering Water Rail, a Skylark flew south over the area, 12 Meadow Pipits and nine Linnets flew west and a male Blackcap flew along the upper brook and one Chiffchaff was singing.

A Peacock was our second butterfly species of the year. 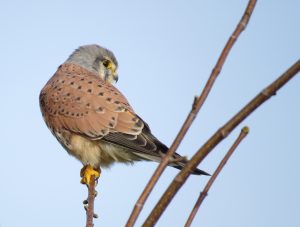 A Swallow flew west at 11.50 am and a Peregrine flew east along the beach. However, most notable was an easterly passage of Kittiwakes, most between 10.20-11.20 am, totalling 343 birds. Also, 32 Common Scoters flew west and two Skylarks were noted.

A misty, cold morning put a block on Spring migrants. A few Meadow Pipits and Chaffinches flew west, a Blackcap was present and the  Water Rail and a Moorhen were seen together. 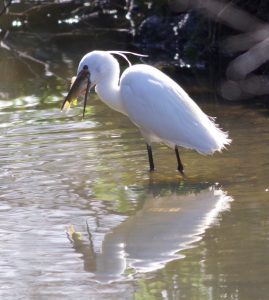 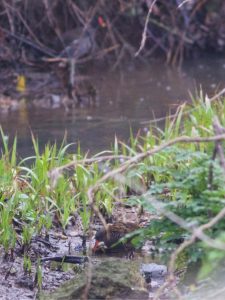 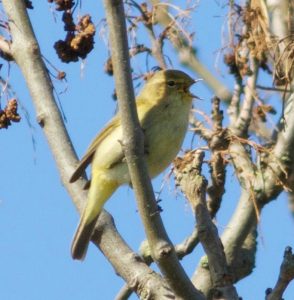 With Geoff on family duties in deepest Berkshire, Andy had free rein (and used it well). A Sand Martin, which flew west at 7.35 am, was our first of the year as were two drake Pochards, and a Pheasant calling unseen from within the sewage works. Also, our second Merlin of the year and ten Black-tailed Godwits flew west, a female Wheatear was on the shingle ridge and there was a steady movement of Meadow Pipits. 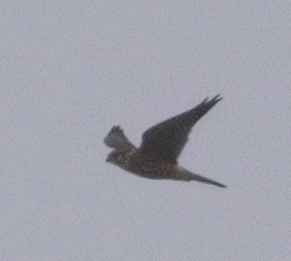 Cloudy with a light NW wind. After yesterday’s events, today proved an anticlimax. There were about eight Red-throated Divers and 13 Great Crested Grebes offshore. A Fulmar flew east and two Gannets wee offshore. Two Shelducks flew west, two Common Scoters flew east and another four, on the sea, flew off west. Waders included 12 Sanderlings and 112 Turnstones (a significant increase suggestive of return passage). A Blackcap was heard singing at the back of the east bank and there were three Linnets in the scrub.

Cloudy with a light SW wind. A good day for the site’s year list. A female Blackcap was found along the upper brook; a Bar-tailed Godwit flew east apparently to land on the Hampton flats; shortly afterwards two Swallows flew west along the shingle ridge and, finally, a Firecrest showed well, if briefly, near the scout hut. Other birds included at least six Red-throated Divers and seven Great Crested Grebes offshore, two Gannets and two Shelducks west and a flock of 11 Common Scoters east and a Marsh Harrier drifting east over the tidal ponds. There were 22 Brent Geese on the beach. Waders included 15 Sanderlings on the beach and 23 Curlews had gathered on the Hampton flats on the incoming tide. A group of four Common Buzzards were soaring to the SE. One Skylark and 18 Meadow Pipits flew west and a male Wheatear was on the shingle ridge.

Cloudy and mild with a light SW wind. The Spring equinox and with it more hope after two weeks of blocking winds. Looking up to locate Jackdaws calling, I picked out six birds high up and flying west. Don’t often note passage of this species here. A male Stonechat on the edge of the  coastal path was another migrant. Six Black-tailed Godwits flew west at 7.52 am; our first since one on New Year’s Day. A male  Wheatear appeared on the shingle ridge where it remained during the morning. Later, a Great Skua flew west at 11.35 am. A few Red-throated Divers, mostly in summer plumage, a few Great Crested Grebes, two Common Scoters and a redhead Red-breasted Mergansers were offshore, an adult Gannet and a flock of ten Common Scoters flew east. There were 23 Brent Geese and 15  Sanderlings were on the beach. Two Common Buzzards and a Sparrowhawk circled beyond the estate. 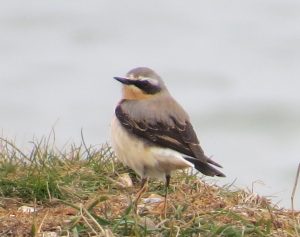 A stroll around the site in the morning by Andy produced our first Wheatear for the year on the caravan park fields and a Rook overhead. Meanwhile, Arnie’s afternoon visit was rewarded with good views of the usually elusive Water Rail, nine Sanderlings and a Grey Wagtail on the beach and an influx of 4-5 Chiffchaffs.

Sunny with a much lighter NW wind but cooler too.  There were c6 Red-throated Divers offshore, two Gannets flew east and a string of some 400 Cormorants moved west mid-morning. Two Shelduck also flew west and four Common Scoters east were the first recorded this month. Two Sparrowhawks flew low over the area and a third Kestrel caused a spat with the local pair. 15 Sanderlings were on the beach, 12 Lesser Black-backed Gulls flew west and the first significant vis mig was dominated by 129 Meadow Pipits with also three Reed Buntings which flew west.

Cloudy with strong SW winds and mild. Hopefully, this will be the end of the strong winds that have suppressed our birding for most of the month? One Red-throated Diver and a flock of ten Golden Plovers flew west and a pair of Pintail, only our second record of the year, flew east. There were 17 Sanderlings on the beach and three Meadow Pipits flew west.

Cloudy, strong NW wind and rain. There were 115 Brent Geese on the beach accompanied by a drake Shelduck. A group of seven Golden Plovers flew west and seven Snipe could be seen on the Marsh Pool. A large female Sparrowhawk whipped through the caravan park. A male Kingfisher (and therefore not the one seen regularly during the winter) was in the brook near the sewage works entrance. A surprise as usually they have left for the breeding areas by now.

Sunny with a strong NW wind. There were 100 Brent Geese on the beach, a pair of Shelducks flew west over the beach and, late morning, two immature drake Eiders appeared close inshore off the Obs. An immature Marsh Harrier struggled to make westerly progress against the strong winds at 7.20 am. There were 17 Sanderlings on the beach, 14 Meadow Pipits flew west and a Chiffchaff sang briefly in the Scout Wood and then made its way along the east bank.

Sunny with strong WNW winds. A Great Crested Grebe, a Fulmar and a Gannet flew west. There were 185 Brent Geese on the beach. Waders included a single Grey Plover and 22 Sanderlings and a second-summer Mediterranean Gull flew west close inshore. A Chiffchaff was seen along the upper brook and a flock of 28 Goldfinches gathered in the trees behind the Obs. 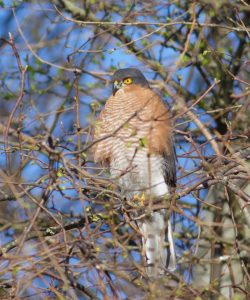 Cloudy with a fresh SW wind. There were four Red-throated Divers, three Great Crested Grebes and the pair of Red-breasted Mergansers offshore.  One Gannet flew west, there were 42 Brent Geese on the beach and three Little Egrets were on the Hampton flats. One Shelduck flew west and a duck Eider was offshore and drifting west. Waders included a Grey Plover on the beach, two Snipe visible on the Marsh Pool and 35 Curlews circling over the caravan park fields. Three adult Lesser Black-backed Gulls flew west together and a whisper of vis mig was represented by one Stock Dove, seven Meadow Pipits and a Linnet flying west.

Sunny with a fresh SW wind. A Gannet flew east and three Shelducks flew west. There were 45 Brent Geese on the beach. A single Golden Plover flew west followed later by a Knot (another addition to the year list).

Cloudy with a fresh southerly wind. There were six Red-throated Divers, four Great Crested Grebes and a pair of Red-breasted Mergansers offshore. Fulmars flew east and west and three Gannets flew east. There were 50 Brent Geese on the beach. Ten Sanderlings were on the beach and a Snipe and 18 Redshanks were on the beach. Gulls on the beach included 15 Common Gulls and 12 Great Black-backed Gulls. A flock of c30 Fieldfares flew west (new for the year) and a female Stonechat in the scrub was also a migrant. 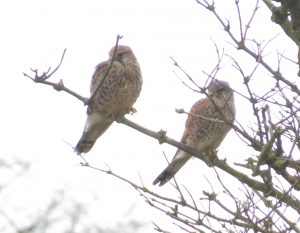 Cloudy, moderate westerly wind and cool. There were 73 Brent Geese on the beach and five Red-breasted Mergansers and a duck Eider offshore. 47 Oystercatchers gathered on the shingle ridge at high tide and an adult Mediterranean Gull flew west over the area. One Stock Dove flew west, there was a flock of 15 Goldfinches along the east bank and three Linnets outside the churchyard flew off along Church Way.

Cloudy with a light SW wind. Bird of the day was a drake Goosander,our first of the year,which flew west at 8.10 am. A Marsh Harrier (our third this year and first since 6th January) flew west at 7.20 am, four Shelduck and ten Gannets flew east and a pair of Red-breasted Mergansers were offshore. An  adult Mediterranean Gull flew east, there were 20 Brent Geese and 15 Sanderlings on the beach and three Snipe were visible on the Marsh Pool. A female Reed Bunting was also present.

Cloudy and rather dull with a light NW wind. There was a single Great Northern Diver offshore of the Obs,  a summer plumage  Red-throated Diver flew west close inshore and there were three Great Crested Grebes and a pair of Red-breasted Mergansers offshore. A Fulmar and three Gannets flew east and 70 Oystercatchers flew east as the tide receded. There were 80 Brent Geese and 15 Sanderlings on the beach and 30 Redshanks were on the Marsh Pool. A vocal adult Mediterranean Gull flew over the Obs and the football pitch and drifted east. A Kingfisher flew down Coot Strait and a Rock Pipit (not yesterday’s bird) was at the mouth of the remnant brook. There were also five Greenfinches in flight over the estate and two Linnets in the scrub. 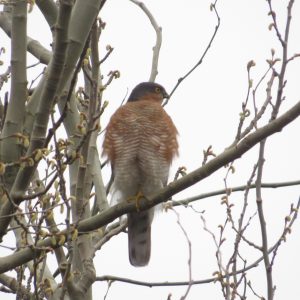