The total of 97 species for the month was lower than any of the previous ten years which averaged 105 species. This was presumably due to the dominance throughout the month of southerly winds. There were a few days with light northerly winds, one of fresh NW but none from the NE. The total did include our third ever Cattle Egret and Cetti’s Warbler and Osprey and Spoonbill. However, a chance of a flycatcher this year now seems unlikely, or Redstart or Black Tern.

Cloudy, warm with a light SW wind. A summer plumage Red-throated Diver offshore was our first returning bird. There were also two Great Crested Grebes and two Grey Herons. Two Common Buzzards,seen soaring behind the church, were our first since 12th August. Waders included a single Knot and Bar-tailed Godwit flying west together. Three Arctic Skuas and three Great Skuas flew west, there were 12 Sandwich Terns and a juvenile Common Tern offshore and an auk sp flew east. A male Great Spotted Woodpecker was in the churchyard and Kingfisher and Grey Wagtail were noted. Four Stonechats were hanging around the Obs, a Wheatear was on the beach and a female Reed Bunting was in the bushes opposite the Obs.

Sunny with a moderate SW wind. On an otherwise quiet day, the adult Spoonbill, which flew west at 9.18 am, was a welcome addition the the year list. There have now been a total of 13 records, all but one in the last 13 years and five of those in September. Other birds heading west include four Gannets and two Shelducks. A Great Spotted Woodpecker circled over the Obs calling and two Rooks flew west, the first of the Autumn.

There was a large movement over a wide front,  of Swallows and House Martins (timed at 80 per minute between 8.45-9.15 am). There was also a steady stream of Meadow Pipits. A Wheatear and a pair of Stonechats were also noted.

There were three Stonechats and a Wheatear was on the beach.

Cloudy, light drizzle became steady rain. Light southerly wind. There were three Little Egrets on the beach. Waders included our first Snipe of the Autumn, flushed twice from the area, a Knot,  a juvenile Sanderling and two Redshanks on the beach and three Black-tailed Godwits flew west at 11 am. There were also seven Sandwich Terns on the beach and a Kingfisher flew along Coot Strait.

Peter Curd reported a flock of Avocets (estimated 10-20) flying west at 2.30 pm. Probably our largest flock even at the lower end of the estimate.

Cloudy, light SE wind.  Five Gannets and two Grey Herons flew west.  Waders included 96 Ringed Plovers and 14 Sanderlings (including at least five juveniles).  Two Stock Doves flew south over the area, two Kingfishers were chasing each other along the middle brook and a Great Spotted Woodpecker flew high east. Six Swallows flew west and c10 House Martins were over the estate. There were two Grey Wagtails over the football pitch, a pair of Stonechats in the scrub and a count of six Chiffchaffs. One Jay flew high west and, late in the morning, a Reed Bunting in the rose bush flew west (our first of the Autumn) and a Corn Bunting flew west over the Obs (our first of the year).

There were five Sanderlings on the beach.

Sunny with  light SE wind. A colour-ringed Sanderling on the beach had been ringed in Orkney as an adult in the Spring on last year. Later seen in Iceland in May and Grenham Bay in October, and this year seen in Orkney in April and May and again in Iceland in July. It seems likely that it is part of the Greenland breeding population. A Knot was also on the beach and three Arctic Skuas were chasing gulls distantly over the sea. Two Kingfishers chased each other along the middle brook, a Great Spotted Woodpecker flew high east over the area and the pair of Stonechats were in the scrub. An influx of Chiffchaffs with about 20 birds, two Blackcaps and five Long-tailed Tits were in the Elm Wood. 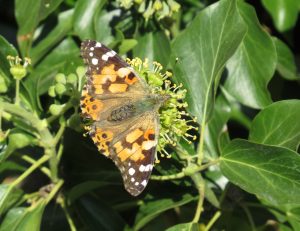 Three parties of Brent Geese flew west, each consisting of seven birds, were the first here this autumn. There were three Stonechats in the scrub.

Sunny with a light northerly wind. A Gannet, eight Wigeon, four Teal and two Great Skuas flew west. Three Common Scoters were also noted. Waders included single Redshank and Curlew on the beach. A Hobby flew west over the estate and sewage works and a Great Spotted Woodpecker was heard calling by the sewage works. There were three Stonechats in the scrub and a Blackcap and six  Chiffchaffs were also seen.

Sunny with a light northerly wind. There were three Little Egrets in the brook. Four Shelducks  flew west and there were three Wigeon on the tidal ponds. There were 29 Oystercatchers on the beach and a Common Sandpiper was heard over the beach. A juvenile Mediterranean Gull flew east, a Common Tern and two Great Skuas flew west. Ten Swallows flew west, a pair of Stonechats were in the scrub, there were four Long-tailed Tits by the sewage works entrance and the flock of 60 Linnets was maintained. 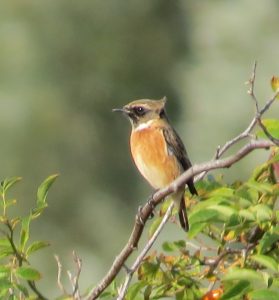 Seven Great Skuas, five Arctic Skuas and a few Common Terns flew west. The Cetti’s Warbler was heard again as it gave a burst of song near the sluice. A Jay was also seen.

Cloudy, calm and humid. Light northerly wind. Four Gannets and  three Common Scoters flew east. An adult and a juvenile Grey Heron were on the beach. Waders included four Redshanks on the beach and a Dunlin in flight over the area. There were six Sandwich Terns offshore and three Common Terns, including a juvenile close inshore, flew west. 20 Swallows and a Yellow Wagtail flew west. A female Stonechat in the scrub was our first of the autumn, a Jay flew west into the sewage works and the Linnet flock on the shingle ridge had risen to 60 birds.

Sunny and warm with a light northerly wind. Four Teal flew west and eight Common Scoters (2 and 6) flew east. Waders included single Knot (with the Ringed Plovers and Turnstones) and Bar-tailed Godwits (with the Oystercatchers) on the beach. Both appeared intent on having a good sleep after a North Sea crossing (?) despite disturnbance. One Arctic Skua flew east and two flew west. Bird of the day, however, despite giving little or no views, was a Cetti’s Warbler calling in the vegetation alongside the middle brook (only our third record). Also, a juvenile Great Spotted Woodpecker was in the Elm Wood, one Sand Martin and two Swallows flew west, a Wheatear was on the beach and Yellow and Grey Wagtails were seen.

Sunny, warm, light SW wind. Three Gannets were noted offshore, a juvenile Grey Heron was on the beach and two Little Egrets were roosting in the sewage works trees. Two Whimbrel were resting on the beach, despite regular disturbance, but flew off west when joined by a third. A Guillemot was close inshore by the tidal ponds but flew off west. Warblers included a Lesser Whitethroat and a Whitethroat and a juvenile Willow Warbler. There was a Wheatear and two Grey Wagtails. 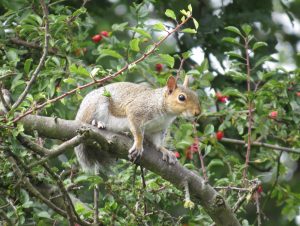 Cloudy, light SW wind and light rain. An Osprey which flew west over the beach at 7.17 am was new for the year. Two Shelducks and 12 Mallards flew west and ten Common Scoters flew east. Waders included 18 Oystercatchers and two Dunlins on the beach, a Curlew flying west  and a Redshank in the brook. Three Swifts flew south over the area, c10 Sand Martins, c50 Swallows and  c30 Meadow Pipits flew west as did a group of five Grey Wagtails. A Wheatear was on the shingle ridge and warblers included a Lesser Whitethroat and a juvenile Willow Warbler.

A pair of Wigeon flew west and waders included 56 Ringed Plovers, three Sanderlings and 94 Turnstones on the beach.

Sunny with a fresh north to NW wind. Bird of the day was Manx Shearwater with one flying west and then east close inshore 25 minutes later and another flying west. Other birds on the move included a Fulmar, a few Gannets, five Shelducks, seven Common Scoters, a Hobby low over the sea, a Golden Plover, three Greenshanks, two Arctic Skuas, six Great Skuas and a Common Tern.

Sunny with a fresh NW wind. The first sign of any movement was a drake Tufted Duck heading west. However, it soon developed into a movement of skuas with 61 Arctic Skuas and 12 Great Skuas during the morning. Other birds on the move included a flock of five Great Crested Grebes, only a single Gannet, a Hobby, seven Sandwich Terns and two Common Terns all heading west. Vis mig included two House Martins, four Meadow Pipits and a Yellow Wagtail west. Warblers included six Chiffchaffs and two Willow Warblers.

Cloudy with a moderate SW wind and steady rain between 8 and 10 am. Waders included a single Sanderling on the beach and three Bar-tailed Godwits flying west over the beach but not much else was seen in difficult conditions. 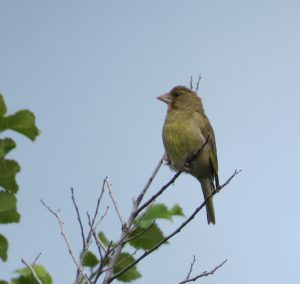 A Common Sandpiper was the only bird of note in a brief visit by Andy.

A Cattle Egret, which flew west low over the sea at 6.48 am, was only our third record (after one in May last year and one in April this year). Waders included a flock of nine Whimbrels, four Bar-tailed Godwits and two Greenshanks.  There was a movement of Swallows along with a few Meadow Pipits and Yellow Wagtails. Warblers included one Reed Warbler, one Lesser Whitethroat and four Chiffchaffs.