A total of 88 species for the month compares with an average of 85.2 species over the previous ten years and represents the best start to the year since 2013 when 96 species were recorded in January. However, only one species recorded this month was not recorded in 2019; Slavonian Grebe, which was recorded a number of times between 3rd and 25th. Other notable birds included the lingering Bullfinch seen several times and a Red-necked Grebe and a Firecrest on 8th. Counts of Red-breasted Mergansers, up to 14, were a welcome improvement on recent years and there was a record count of 116 Sanderlings on 6th.

Cloudy with a moderate SW wind. Only four Red-breasted Mergansers were noted offshore today. A few small flocks of Golden Plovers, totalling 48, flew west over the sea. The Bar-tailed Godwit was on Hampton flats. Other birds noted included two Meadow Pipits in the scrub, a Jay flying into the Scout Wood and 11 Linnets perched atop trees in the Elm Wood.

Two newly-planted sycamore trees  have appeared along Swalecliffe Court Drive. Not native but at least not more eucalyptus! 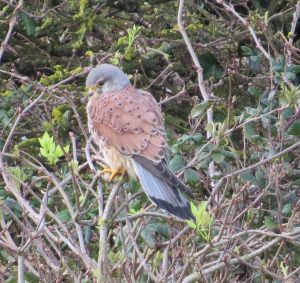 The Firecrest made a second appearance (first on 8th) along the east bank at 9.45 am.

The two Little Grebes were in Coot Strait,  a Common Buzzard circling over the estate was new for the year and the Water Rail was seen in the brambles along the east bank.

Cloudy with a few showers and a moderate SW wind. There were 11 Red-breasted Mergansers offshore and the two Little Grebes were again in Coot Strait. Waders included 30 Oystercatchers and a Grey Plover on the beach.  The supporting cast included the regular Kingfisher, male and female Stonechat, two Long-tailed Tits and ten Linnets on the shingle ridge. A Great Northern Diver was seen on the sea off the caravan park in the afternoon.

Cloudy and calm. The Slavonian Grebe was again offshore, there were also 14 Red-breasted Mergansers  there and four Shelducks and a Greylag Goose flew west and a Common Scoter flew east. Waders included a single Grey Plover, there were two Little Grebes along Coot Strait and a Grey Wagtail was also heard.

Cloudy with a light NE wind. Two Shelducks flew west and a flock of 17 flew east. There were seven Red-breasted Mergansers offshore and 140 Brent Geese on the beach.  There were c100 Sanderlings along the beach. Other birds included a Grey Wagtail in the sewage works, the pair of Stonechats and eight Linnets.

Cloudy and calm. Finally, we had our first Great Northern Diver and another appearance of the Slavonian Grebe first seen here on 3rd. Other birds on the sea included four Wigeon, a pair of Gadwall, a duck Common Scoter but only  single pair of Red-breasted Mergansers. Waders included the three Lapwings and two Snipe on the Marsh Pool and c50 Sanderlings. Other birds included Kingfisher, a pair of Stonechats and seven Linnets on the shingle ridge, whilst the call of Jackdaws was heard for the first time this year. 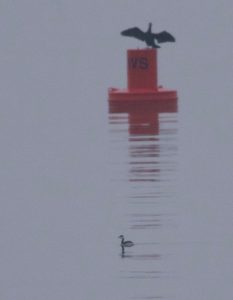 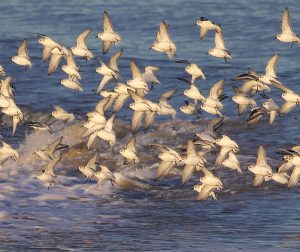 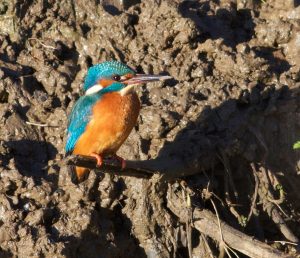 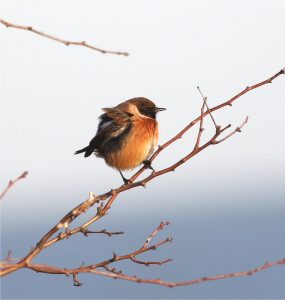 Sunny, calm and cold. There were 11 Red-throated Divers, two Shelducks and two Wigeon west, 110 Brent Geese moved east along the beach and there were nine Red-breasted Mergansers offshore. A female Marsh Harrier flew west over the sea at 10.15 am and waders included 70 Sanderlings and 12 Snipe in the Marsh Pool.  An adult Mediterranean Gull was on the Marsh Pool and then on the beach. Three Stonechats, two males and a female, a Goldcrest was the first sighting for two weeks and a pair of Reed Buntings were also present.

A Razorbill flying west was our first auk of the year. There were 13 Red-breasted Mergansers offshore, two Lesser Black-backed Gulls were seen and the Water Rail showed if briefly as it swam across the brook.

Sunny with a light westerly wind, cooler. There were seven Great Crested Grebes and eight Red-breasted Mergansers offshore, two Shelducks flew west and seven Common Scoters were on the sea. Waders included 70 Sanderlings on the beach. Other birds included Kingfisher, a pair of Stonechats, two Long-tailed Tits in the churchyard, seven Linnets over the shingle ridge and a pair of Reed Buntings.

Sunny with a moderate westerly wind. There were 90 Brent Geese on the beach, ten Shelducks – two singles and a flock of eight – flew west and there were five Red-breasted Mergansers offshore. Star waders was a Purple Sandpiper on the beach by the caravan park – this was the bird that was photographed recently at Hampton with a deformed bill. Other waders included a Grey Plover west, a Bar-tailed Godwit on Hampton flats and, of course, the three amigos Lapwings on the Marsh Pool.

Andy and I met up with Michael Lee of Birdwise East Kent this morning. We had a long and interesting conversation in which we shared our experiences of birding at Swalecliffe whilst he explained his proposals for tackling the problems of disturbance along this coast from Whitstable to Pegwell Bay.

Cloudy with a moderate southerly wind. There were seven Red-breasted Mergansers offshore and waders included a single Golden Plover on the beach, 35 Sanderlings along the tideline and a Bar-tailed Godwit on the Hampton flats. Two Rooks flew west over the beach and were another addition to the year list. Other birds included two Meadow Pipits on the beach, a pair of Stonechats and six Linnets hanging around the scout hut.

At the half-way point of the month, the 82 species recorded equalled the total for the whole of January last year.  A staggering 17 species ahead of last year’s very poor start!

Andy’s decision to make a late morning/lunchtime visit after earlier rain was, perhaps, encouraged by Greg’s finding of a Purple Sandpiper feeding along the promenade by the caravan park. It proved inspired with a Red-necked Grebe offshore by the caravan park at 12.05 pm which slowly drifted west, two Little Grebes on the Marsh Pool and another appearance of the male Bullfinch by the scout hut.

A Jay was an addition to the year list.

Sunny periods with a moderate SW wind. A Fisheries Patrol vessel was preceded by about 100 Red-throated Divers heading west. There were 11 Great Crested Grebes and three Red-breasted Mergansers offshore and two Shelducks flew west. 90 Golden Plovers flew west and a Peregrine flew west by the Obs. 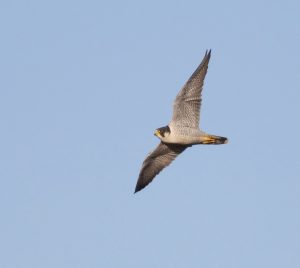 Cloudy with a moderate westerly wind. At last a flock of 70 Golden Plovers on the beach (another 20 flew west), a party of five grey geese came in from the SE heading towards Sheppey (three Greylag and two White-fronted Geese) and an  adult Little Gull flew west offshore; another three additions to the year list. Two Gannets flew east, a drake Shelduck flew west, two Common Scoters were seen and nine Red-breasted Mergansers were offshore. Another Marsh Harrier flew west, two flocks of waders distantly offshore did include a number of Grey Plovers and possibly some Knot. A flock of 102 Sanderlings were roosting on the beach. Other birds included the male Kingfisher along the middle brook, a male Great Spotted Woodpecker in the large trees along the upper brook, a male Stonechat, a Chiffchaff and seven Linnets.

Cloudy and mild with a fresh NW wind. Hopes that, with a fresh onshore wind, sea-watching might be at least better than it has been. A few duck were on the move, two Wigeon and two Common Scoters flew west but a drake Goosander west and a duck Eider east were welcome additions to the year list. Waders included 36 Ringed Plovers, 65 Sanderlings and 70 Dunlin roosting on the beach between the groynes and the ever-present three Lapwings were present as ever on the Marsh Pool. Other ever-present birds included the male  Kingfisher along the middle brook and a Chiffchaff at the Obs. 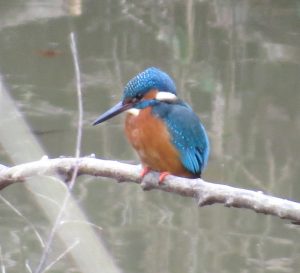 Cloudy and mild with a fresh SW wind. An  adult Gannet flew west, there were 90 Brent Geese on the beach, an immature Peregrine flew west along the beach and there were 68 Sanderlings on the beach. A Mediterranean Gull joined Black-headed and Common Gulls on the Marsh Pool and other birds noted included the male Kingfisher, pair of Stonechats and two Long-tailed Tits.

The Slavonian Grebe was seen again off the caravan park and later in the morning heading west by the Obs. Andy enjoyed a purple patch around the entrance to the sewage works with another appearance of the male Bullfinch (fourth sighting; first seen on December 5th), a female Blackcap and a Firecrest – all within the space of 35 minutes. 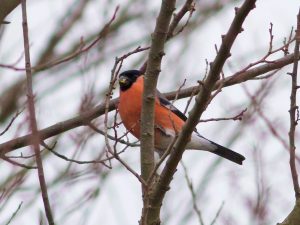 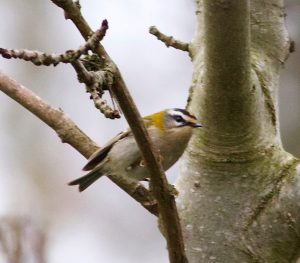 There were estimates of between 100-200 Sanderlings scattered along the beach. There were seven Meadow Pipits around the “pigloos” and the Water Rail showed well.

Cloudy at first then sunny, with a moderate SW wind. The Slavonian Grebe was seen again off the caravan park. There were 100 Brent Geese on the beach and a Common Scoter (the first this year) flew east. A Marsh Harrier flying west over the estate was also new for the year. Waders included a total of 116 Sanderlings on the beach (a  record count for this site). An adult Lesser Black-backed Gull flew west offshore (another addition to the year list). There were two Goldcrests along the east bank (a fourth addition to the year list) and other birds included a Kingfisher, three Stonechats (including two males), a Chiffchaff and 12 Linnets. Late morning, courtesy of a dog walker, three Snipe were flushed from the Marsh Pool  to make it a fifth addition to the year list.

Sunny with a moderate westerly wind. There were c200 Brent Geese on the beach and a flock of ten White-fronted Geese and one Shelduck flew west over the sea. Waders included 46 Ringed Plovers and c80 Sanderlings on the beach. A Great Spotted Woodpecker,heard calling in the tall trees along the upper brook, was new for the year. Other birds included Kingfisher, Grey Wagtail, Chiffchaff, two Long-tailed Tits and two Reed Buntings.

Andy’s afternoon constitutional was rewarded by the sight of a Slavonian Grebe on the sea off the skate park at 3 pm. A species we failed to see in 2019!

Cloudy and calm. There were six Red-breasted Mergansers offshore, a flock of 11 Wigeon and four Gadwall flew west and a pair of Tufted Ducks flew west close inshore. Two adult Gannets flew east. The three Lapwings continue to inhabit the Marsh Pool and the Water Rail was seen again along the middle brook. Other birds included two Chiffchaffs and two Long-tailed Tits.

Wildlife other than birds seldom get a mention in the winter but a Common Striped Woodlouse (yellow form) was seen cruising the leaf litter by the Obs. 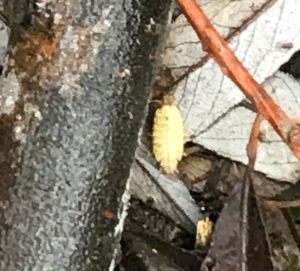 Cloudy, murky and calm. It turned out to be a  good day for wildfowl. There were six Red-breasted Mergansers offshore. A pair of Shovelers flew east. Later, a large skein of White-fronted Geese (c80) came in off the sea over the tidal ponds and headed south at 12.23 pm. This was followed by a  small flock of duck which circled over the ponds and headed west and consisted of about five Wigeon and singles of Teal, female Pintail and drake Shoveler. A pair of Gadwall on the sea flew off west. Waders included a Grey Plover and a Bar-tailed Godwit and 14 Sanderlings. A Great Skua was noted on the sea at 10.20 am and was still present at 1 pm. The Water Rail was present along the upper brook and the male Bullfinch made its third appearance, by the sewage works entrance. Other birds noted included a Grey Wagtail, a pair of Stonechats, a Chiffchaff and two Reed Buntings. A total of 59 species was a good start for the year.

A Water Vole, the first for months, was seen along the middle brook. There’s still hope! 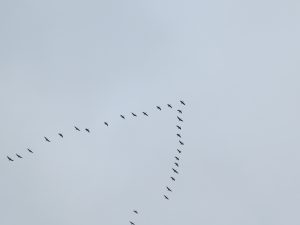