The total of 79 species for the month was lower than any of the previous ten years which averaged 87.4 species.  Only one species, Corn Bunting, was added to the year list, and that was a species we had never failed to see before!

Cloudy with a light WNW wind and mild again. There were 30+ Red-throated Divers and a single Black-throated Diver offshore.  Two Shelducks and four Teal flew west and there were six Red-breasted Mergansers offshore. Waders included a Grey Plover and 32 Sanderlings on the beach, three Lapwings on the Marsh Pool and 15 Curlews flew west over the area from the direction of the caravan park fields as the tide receded (Philip Hurst counted 58 on these fields that morning). Other birds included a Kingfisher, a female Great Spotted Woodpecker, the pair of Stonechats, two Long-tailed Tits in the Elm Wood, 12 Goldfinches in the churchyard and three Linnets on the scout hut car park.

Arnie van Orsouw reported a Black-throated Diver off the eastern end of the beach.

Cloudy with a light SW wind and still mild. There were c10 Red-throated Divers offshore and seven Great Crested Grebes included a party of four flying west. The Pale-bellied Brent Goose was on the beach with its dark-bellied cousins but later, when there were 160 Dark-bellied Brent Geese on the beach, there was no sign of it.  c100 Golden Plovers flew west in small parties during the morning. An adult Mediterranean Gull was on the beach and a Peregrine flew south over the sewage works. Other birds included a Moorhen in the brook (curiously elusive at the moment), two Great Spotted Woodpeckers, a Grey Wagtail, the male Stonechat in the scrub and a Long-tailed Tit in the Elm Wood. 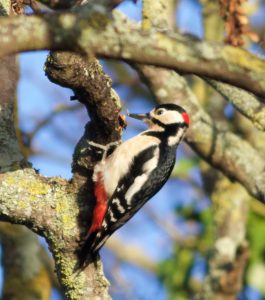 A Fox, looking very bedraggled and covered in mud, was seen weaving its way through the crows on the beach at low tide. We later learned that it had got into the skate park,  panicked when it couldn’t get out, and then was set on by dogs!

A female Great Spotted Woodpecker was the highlight for Arnie van Orsouw.

14 Red-throated Divers and seven Red-breasted Mergansers were viewed on a flat calm sea. There were c300 Golden Plovers on the beach early morning and an immature Mute Swan appeared at midday.

Mild again  but sunny this time with a light SW wind. More activity today. There were 35 Brent Geese on the beach, two Shelduck and eight Common Scoters flew west and a drake Red-breasted Mergansers flew east.  An immature Marsh Harrier circled over the sea for some time before heading south inland. Only one crow and no gulls could be bothered to mob it (a Christmas truce?). A Great Skua flew west and an adult Mediterranean Gull was settled on the sea. A Rock Pipit was feeding along the brook behind the shingle ridge (uncommon here in winter). The female Kingfisher was along the middle brook, the pair of Stonechats in the scrub and a Grey Wagtail was in the brook. 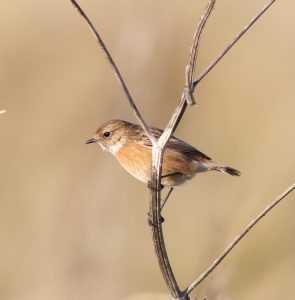 Cloudy, mild with a fresh westerly wind. Only one Great Crested Grebe on the sea and no divers. A flock of 19 Common Scoters flying east were the first seen this month. Waders included 26 Oystercatchers on the shingle ridge at high tide, seven Sanderlings on the beach and two Lapwings and a Snipe on the Marsh Pool. Few small birds seen in the fresh winds but eight Goldfinches and five Linnets were amongst those noted.

Cloudy with a few showers at first then sunny with a light SW wind. There were ten Red-throated Divers, including eight flying east, eight Great Crested Grebes offshore and three Gannets flew east. Two Brent Geese on the sea were the only one seen all morning. Waders included two Grey Plovers and 26 Sanderlings on the beach and three Lapwings and a Snipe on the Marsh Pool. The often elusive flock of Linnets numbered ten.

Greg Herne was out today. He recorded 20+ Sanderlings amongst the roosting Dunlin and Ringed Plovers and three Grey Plovers. The three Lapwings were on the Marsh Pool, the Little Grebe was along Coot Strait and the cock Stonechat was also seen.

Sunny with a light SW wind and milder. Two adult Mute Swans flew east early morning. There were at least four Great Crested Grebes and a redhead Red-breasted Merganser on the sea. The Little Grebe was seen further up the brook than before, near to the scout hut. The female Kingfisher was also seen in this area. Waders included a flock of 40 Golden Plovers flying west over the sea, three Grey Plovers on the beach, the three Lapwings were on the Marsh Pool (another party of 17 flew west) and 15 Sanderlings on the beach. A Marsh Harrier flew NW high over the football pitch and an immature Peregrine flew west over the beach.

Cloudy with a moderate SE wind and very cold. A party of seven Eiders (which included four drakes) flew east close inshore. No divers were seen, only one Great Crested Grebe was noted offshore and two Gannets flew east. One Little Grebe was seen in Coot Strait (the same location as previous records this year but the first sighting since November 22nd).

Sunny with a light easterly wind and very cold. There was a pair of Red-breasted Mergansers on the sea off the Obs for much of the morning. A thousand or more Cormorants flew east offshore and 114 Carrion Crows were counted along the beach. A Kingfisher was seen in the remnant brook and perched briefly on the shingle ridge. Later, it was seen flying across the grassland towards Coot Strait carrying a small fish. Two Buzzards, circling together high to the SE, were our first here since October. 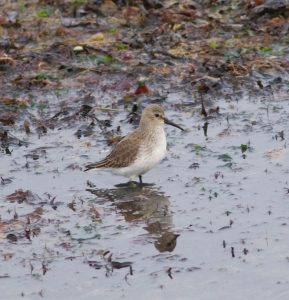 Sunny, colder with a light SE wind. Two adult Gannets flew east distantly offshore. These were the first here for nearly three weeks. A flock of c160 Brent Geese descended onto the beach but, again, did not include the Pale-bellied individual. Four Red-breasted Mergansers (two  drakes and two redheads) lingered close inshore as they fished busily together. A Marsh Harrier, a female with red tags on both wings, flew east. There were three Long-tailed Tits in the churchyard and another Greenfinch was seen along the east bank. 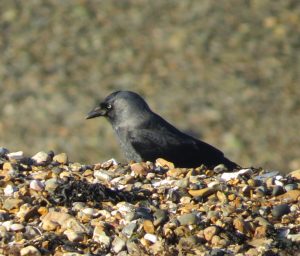 Cloudy with a light NW wind. There were c50 Brent Geese on the beach (one party of ten remaining after others had left  included seven juveniles). One Shelduck and three Wigeon flew west. Waders included 40 Oystercatchers, 44 Ringed Plovers and 17 Dunlin on the beach and three Lapwings and 19 Redshanks on the Marsh Pool.

Sunny with a moderate westerly wind. A quiet morning with one Red-throated Diver offshore and 20 Brent Geese on the beach. A flock of 130 Golden Plovers flew off the beach and other waders included 20+ Redshanks on the Marsh Pool at high tide. An adult Peregrine and a juvenile Marsh Harrier flew west. A Water Rail swam across the middle brook. A Grey Wagtail was by the sluice and two adult Rooks flew west.

Cloudy, mild  with a light SW wind. A number of Red-throated Divers offshore, one Black-throated Diver, and a Great Northern Diver flew west. A drake Wigeon also flew west. A female Great Spotted Woodpecker flew from the Elder Wood to the sewage works, the pair of Stonechats were in the scrub, a Goldcrest flew into the Scout Wood and a female Reed Bunting was in the bushes opposite the Obs.

Cloudy, dull and mild  with drizzle. There were c15 Red-throated Divers offshore, some on the sea  but most flying east. One Snipe was seen on the Marsh Pool and a Great Skua flew west. Unusually for the time of the year, most interest came form two passerines.  A Corn Bunting was calling in the grassland. It flew up circled high but then dropped down again. It was invisible in the grass but, when it started calling again, it came up on a plant stem and then took off, this time heading strongly SE ( a new bird for the year).  A Firecrest was seen by the entrance to the sewage works, feeding about two feet off the ground and showing well and close before disappearing into the bramble clump. This was presumably the bird seen close by five days earlier.  Hopefully, a wintering bird that we’ll add to next year’s list in January.

Cloudy, mild with light SW wind. Two Red-throated Divers were offshore. Waders included two Grey Plovers and 12 Sanderlings on the beach, eight Curlews flew west along the beach and three Lapwings and 13 Redshanks were on the Marsh Pool. There were 40 Great Black-backed Gulls on the beach. The female Kingfisher was in the brook, two Skylarks flew west, the male Stonechat was in the scrub, a Chiffchaff was along the upper brook and a flock of ten Linnets roamed the area. A lunchtime visit by Arnie, in the rain, was notable for three Moorhens on the grass by the upper brook. An elusive species here, often within the sewage works or hiding in the brookside vegetation, it is interesting to see that there are at least three individuals present. 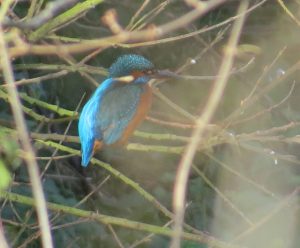 Cloudy with steady rain and a light to moderate SW wind. A wet start to the month and little to report. There was an increase to three Grey Plovers on the beach and the female Kingfisher (Queenfisher?) showed well along the middle brook. Flocks of ten Goldfinches and nine Linnets.