The total of 82 species for the month, whilst a little above last year’s total, was below the average of the previous ten years of  85.6 species. This is of little significance for the year as a whole but two species, our second only record of Raven on 17th and an unseasonal Spotted Redshank on 26th made no appearance last year.

Sunny, light SW wind, cold. Five Great Crested Grebes included three flying west. An adult Gannet flew east, three Shelducks flew west and a pair of Gadwall and two drake Red-breasted Mergansers were on the sea. The adult male Kestrel was plucking prey on one of the groynes at the eastern end of the beach. Waders included 41 Ringed Plovers and three Grey Plovers on the beach. A Little Grebe,which appeared briefly along the middle brook, was presumably the bird seen previously on 26th. Other birds included a Kingfisher, the male Stonechat and two Greenfinches.

Sunny, light WNW wind, cold. Two Moorhens in the brook below the sewage works entrance were the first seen this year! Where to they go? Waders included three Grey Plovers and 18 Sanderlings on the beach, the three Lapwings and a Snipe on the Marsh Pool. An adult Mediterranean Gull flew west. 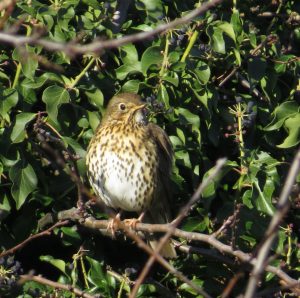 Cloudy with a moderate SW wind and milder. Perhaps surprisingly, this proved to be a good day for the year list. Firstly, a Great Northern Diver was fishing offshore, a drake  Pintail flew west and then an out of season Spotted Redshank flew west along the beach (one was reported from Grove Ferry that morning). This was our first since 2013 and our first ever in winter. Finally, a Little Grebe was present in Coot Strait, begging the question as to whether this a particularly elusive individual (last seen in December) or a new arrival? An adult Kittiwake was also seen.

A crisp, cold morning produced 22 Great Crested Grebes on the sea (the highest count of the winter), a pair of Red-breasted Mergansers and 12 Kittiwakes flying east. A Jay which flew into the churchyard was the first this year.

Sunny with a light southerly wind and cold. There were five Great Crested Grebes on the sea, single Shelduck and Gadwall flew west (latter new for the year) and three Eider ducks (new for the year) flew east. Also new for the year was a Buzzard that flew SE over the estate. Waders included 35 Ringed Plovers, seven Lapwings, 12 Sanderlings and 71 Dunlin. A Guillemot and a Razorbill flew west. Other birds included a Kingfisher, a Great Spotted Woodpecker drumming briefly, the male Stonechat a Greenfinch and three Linnets.

Cloudy at first then sunny with a fresh to strong NW wind and colder. It seems that we’re always waiting and hoping for a change in the weather. Today it came with the promise of some sea-watching. We had our first definite Razorbill, which flew west, a number of Kittiwakes and a single Great Skua which drifted east late morning. However, bird of the day went to two Ravens which flew west close to the Obs at 10 am. This was only our second record, after one in September 2011 and was, given the increase in this species in the county, long overdue.  One Gannet flew west, there were three Red-breasted Mergansers offshore and waders included c120 Oystercatchers flying east on the outgoing tide and 31 Sanderlings on the beach. Other birds included the pair of Stonechats which, like us sought shelter at the Obs.

Our excitement at only the second record of Raven was, however, tempered by the ominous sound of chainsaws. The Council had arrived and felled two mature sycamore trees just outside the churchyard. We had heard from the Church Warden that the Council had been approached about managing  trees just outside the church boundaries because of concerns (of unknown validity) that they might undermine the church foundations. The Council’s response was that the only management  they could offer was to the fell them. As far as we understood, no agreement had been reached. The Church Warden told us that he had received an e-mail from the Council re their intentions and had replied requesting a meeting to discuss the matter further only to be told that they were on site and felling. A belated meeting has been scheduled where the fate of  other trees (we don’t know how many) will be discussed. There has been much clearer of bushes and felling of some trees in the churchyard in recent years and Andy and I have discussed the matter with the Church Warden, providing him with information and advice about the environmental impact of such work. He has seemed quite sympathetic to our concerns about this impact, and the aesthetic impact as well. 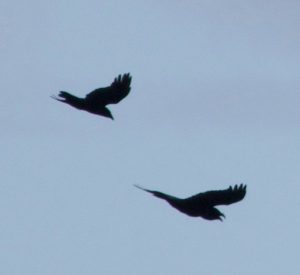 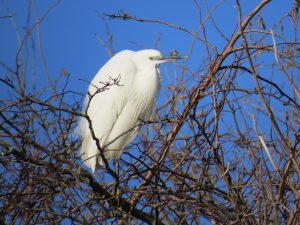 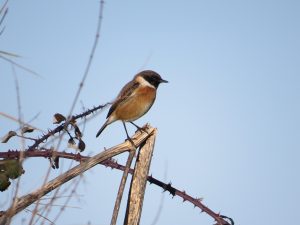 Cloudy, fresh SW wind and drizzle late am. Three Red-throated Divers were offshore and a pair of Red-breasted Mergansers,which remained all morning.  There were c100 Brent Geese on the beach. Waders included two Grey Plovers and 18 Sanderlings on the beach and three Lapwings and a Snipe on the Marsh Pool. Other birds included a Sparrowhawk,  a male Great Spotted Woodpecker in the churchyard, the pair of Stonechats in the scrub, two Long-tailed Tits and two Linnets.

I started the day with a high tide visit to Hampton which secured one of the two Purple Sandpipers that are wintering there. We are hoping one of them will stray on to the site sometime soon. 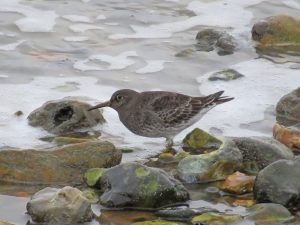 Sunny at times, moderate NW wind. There were c15 Red-throated Divers flying west and a single Great Crested Grebe was offshore. There were 120 Brent Geese on the beach. Other birds included a male Great Spotted Woodpecker and three Long-tailed Tits in the churchyard and the pair of Stonechats in the scrub. 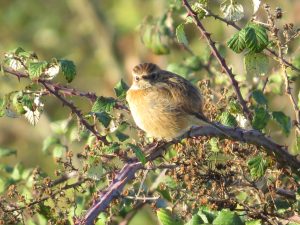 Cloudy, light NW wind and cool. Two Avocets were resting in the shallows by the tidal ponds and a White-fronted Goose flew west at 8.55 am. Two new birds for the year made for a good start to the day.   There were 90 Brent Geese on the beach, 17 Mallards on the Marsh Pool and two Common Scoters flew east.  Waders included 40 Oystercatchers, 54  Ringed Plovers and three Grey Plovers on the beach. Another three adult  White-fronted Geese flew NW across the area at 11.05 am. Other birds included a female Great Spotted Woodpecker in the sewage works, a Grey Wagtail, the male Stonechat and four Linnets on the scout hut car park. 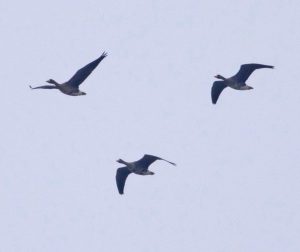 Cloudy, fresh NW wind and cold. A Little Egret, 13 Mallard and two Lapwings were on the Marsh Pool. An adult, apparently intermedius, Lesser Black-backed Gull flew west. Other birds included a Stonechat and a flock of c30 Goldfinches were along the east bank.

Cloudy with a light NW wind. 13 Red-throated Divers flew west and there were two Great Crested Grebes offshore. Two Grey Herons were on the tidal ponds, there were 70 Brent Geese on the beach, a Shelduck and a duck Wigeon flew west and five Red-breasted Mergansers were offshore. Waders include four Grey Plovers on the beach. A Peregrine was on the tidal ponds and later an immature flew west by the Obs. A first-winter Mediterranean Gull was along the shoreline with Black-headed Gulls. Also seen were Kingfisher, Stonechat male, two Long-tailed Tits and six Linnets.

A Marsh Harrier flew west inland. Waders included 32 Oystercatchers on the beach and 80 Golden Plovers flew west. The Snipe in the Marsh Pool are usually elusive and so a total of 11  on show along the water’s edge was unusual. Other birds included Kingfisher, a male Great Spotted Woodpecker, Grey Wagtail and 15 Goldfinches.

A handful of Red-throated Divers flew east and west, six Gannets flew east, one flew west, and ten Common Scoters flew est, with four west. Three Redwings, which flew out of the trees along the upper brook, were new for the year.

Sunny, cooler with a light Northerly wind. One Great Crested Grebe flew west, a Gannet flew east  and a Shag was seen offshore to the east of the tidal ponds. A drake Wigeon was on the foreshore. Waders included 38 Sanderlings on the beach. An Auk sp was seen close inshore but too briefly to be sure of its specific identity with one or two more distantly offshore. Other birds included a Kingfisher, two Long-tailed Tits at the Obs and a Greenfinch which flew south over the scout hut.

Cloudy with a moderate northerly wind. There were at least 30 Red-throated Divers offshore (mostly in flight) and two Gannets and two redhead Red-breasted Mergansers  flew west. One Auk sp flew east. Waders included 48 Sanderlings on the beach and three Lapwings, a Snipe and 25 Redshanks on the Marsh Pool.  Other birds seen included a female Great Spotted Woodpecker, a Grey Wagtail and the female Stonechat.

Cloudy with a light NW wind and cooler. Red-throated Divers were present offshore and Great Crested Grebes included a flock of six heading west. Two Shelducks and five Wigeon flew west, a Common Scoter flew east and there were six Red-breasted Mergansers offshore. Waders included a Black-tailed Godwit flying west, 18 Sanderlings on the beach and three Lapwings and two Snipe on the Marsh Pool. Raptors were represented by a Marsh Harrier flying west, a Peregrine distantly offshore and Sparrowhawk and Kestrel. A Mediterranean Gull was seen and a few auks included one definite Guillemot. The Water Rail was still in the brook where a Kingfisher and two Grey Wagtails were also seen. Other birds seen included Great Spotted Woodpecker and Stonechat and a total of 56 species for the day.