The total of 85 species for the month was a little short of the ten-year average of 87.6. There were two additions to the year list with a fine male Bullfinch along the east bank on 5th and, finally, a Purple Sandpiper strayed from Hampton on 18th.

Cloudy, murky with some drizzle and a light easterly wind. There were four Little Egrets, three around the tidal ponds and one on the Marsh Pool. There was a Grey Heron on the beach and c250 Brent Geese on the beach and by the Tankerton slopes.  A pair of Wigeon flew west and there were six Red-breasted Mergansers offshore.  Waders included the three Lapwings, which had forsaken the Marsh Pool for the beach, and five Sanderlings on the beach. An adult Mediterranean Gull flew east along the beach. Other birds seen included a Kingfisher, a Grey Wagtail and a pair of Stonechats. 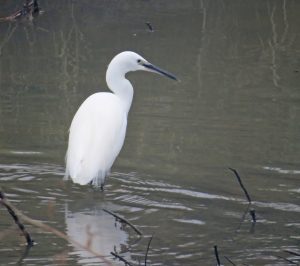 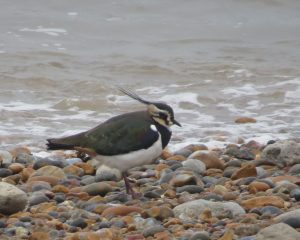 Cloudy with a light southerly wind. There were c20 Great Crested Grebes offshore and 110 Brent Geese on the beach.  A better duck day with two Shelducks east, three Gadwall (the first since January) west and five Teal resting on the sea. A group of nine Red-breasted Mergansers offshore were joined mid-morning by a redhead Goldeneye. There were 45 Golden Plovers on the beach at low tide which flew off west apparently unprovoked. In addition to the three regular Lapwings on the Marsh Pool, one landed on the tidal ponds and a flock of ten flew west. There were also a Little Grebe and 24 Redshanks  on the Marsh Pool and a Great Skua resting on the calm sea. The Water Rail made another appearance along the middle brook, there were five Meadow Pipits in the grassland, two Chiffchaffs and a pair of Reed Buntings on one of the coastal path bushes.

Cloudy, murky, drizzle and light rain, and a light SW wind. Four Red-throated Divers flew east, there were seven Great Crested Grebes and five Red-breasted Mergansers offshore and a Shag flew in along the shoreline from the east, with a Cormorant, and landed by the little pier. Three Shelducks and a flock of 14 Wigeons flew west. The three Lapwings were on the Marsh Pool and 35 Curlews flew east in the direction of the caravan park roost. A Little Grebe was along Coot Strait, a male Stonechat along the coastal path, a Chiffchaff along the east bank and six Linnets were also seen. 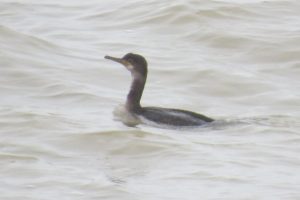 No reports. Birding put aside for family duties.

Greg and Arnie were out on Christmas Eve and were rewarded with Shelduck, three Kestrels, Water Rail, a Kingfisher, two Stonechats and three Greenfinches.

Sunny with a moderate SW wind. A Great Northern Diver lingering close inshore off the Obs was only the second record of this winter. Two Common Scoters flew east and there were six Red-breasted Mergansers offshore. Waders included 65 Sanderlings and 59 Dunlin roosting between the groynes and 20 Redshanks on the Marsh Pool. Other birds noted included a Kingfisher, a Meadow Pipit, a male Stonechat, Song Thrush (only seen occasionally at the moment), a Chiffchaff, a Long-tailed Tit and a Jay.

A count of the Curlew roost at high tide revealed only 22 birds.

Cloudy, moderate SW wind. A drake Red-breasted Merganser was offshore and a Little Grebe was on the Marsh Pool. Waders included 49 Ringed Plovers, a Grey Plover and 67 Sanderlings (the highest count this year). Two Kingfishers were seen, there were 15 Goldfinches in trees near the skate park and 15 Linnets on the shingle ridge.

The Purple Sandpiper was seen again at 3pm today on the beach near the little pier.

Cloudy and mild with a moderate SW wind. There were c50 Brent Geese on the beach, five Red-breasted Mergansers offshore and a single Shelduck flew west. Waders included a Grey Plover and a Bar-tailed Godwit on the beach and the three Lapwings on the Marsh Pool. Other birds included another sighting of the Water Rail along the middle brook, a Grey Wagtail, three Chiffchaffs including one “beachcombing” between the groynes and six Long-tailed Tits.

Sunny and calm. An immature  Purple Sandpiper which flew by at the eastern end of the beach was relocated, not on the beach but on the promenade amongst the dog walkers! Found a worm, flew to the beach and promptly disappeared. Another addition to the year list. Although one or two winter regularly, within walking distance to the east at Hampton, this was our first sighting since October last year. There were 14 Great Crested Grebes and eight Red-breasted Mergansers offshore and 15 Common Scoters flew east. Other waders included two Grey Plovers on the beach and the three Lapwings, with one visible Snipe, on the Marsh Pool. Two Great Skuas flew west, there were three Stonechats including two males, and 15 Linnets over the shingle ridge. 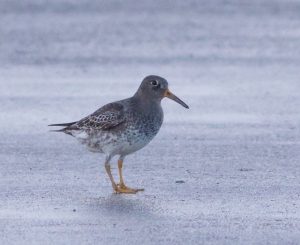 Three adult Kittiwakes flew west, the three Lapwings continue to occupy the Marsh Pool and there were four Goldcrest – three near the car park and one by the sluice.

Greg saw about 100 Curlews leaving the roost in the caravan park fields.

There were six Red-breasted Mergansers offshore, 90 Golden Plovers on the beach (highest count so far this winter) and two Peregrines chasing each other by the Herne Bay pier. A single Bar-tailed Godwit, a Chiffchaff and a second appearance of the male Bullfinch along the east bank were also noted.

Cloudy, with rain from 11 am and a freshening SW wind. There were three Gannets offshore, seven Red-breasted Mergansers offshore, an immature Marsh Harrier flew west at 8.12 am and a Little Grebe was in the brook. Waders included 30 Golden Plovers flying west, 66 Ringed Plovers and single Grey Plover and Bar-tailed Godwit on the beach. Other birds included a Kingfisher, a  Great Spotted Woodpecker, two Jays and two Reed Buntings. 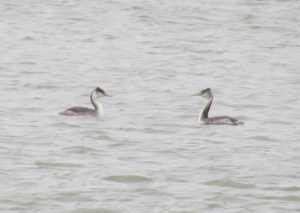 Interest was drawn to the brook today with three Little Grebes in the brook below the sluice and a Water Rail along the favoured middle brook. One was last seen on 4th November (could this be the same?). Also, a Guillemot flew east and a Grey Wagtail was also seen.g 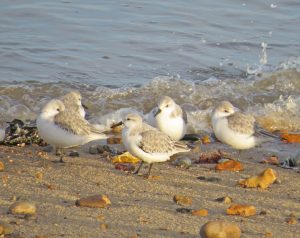 Greg reported 15 Sanderlings and 30 Dunlin amongst the waders on the beach and two Lapwings and a Little Egret on the Marsh Pool. A female Reed Bunting was in the bluethroat bush and a Sparrowhawk scattered starlings as it flew across the caravan park.

Sunny, strong NW wind. Just the sort of winds we had hoped for in the Autumn but didn’t get! One Gannet, three Shelducks and  three Pintail flew west. Two Great Skuas flew west, at 11.30 and 11.40 am, and two Razorbills flew east. Not much else to report although two Chiffchaffs and two Goldcrests visited us at the Obs during our sea watch.

The flock of 50+ Sanderlings was again on the beach.

Cloudy, mild with a light westerly wind. Not much of note. A Great Spotted Woodpecker was heard calling in the sewage works and a Goldcrest was seen in Elm Wood.

A group of 50+ Sanderlings was on the beach between the groynes.

Sunny, calm and with a frost. There were c80 Brent Geese on the beach and a Tufted Duck and a female  Marsh Harrier flew west. Waders included a Grey Plover, 11 Sanderlings and a Bar-tailed Godwit on the beach. The bird of the day was a male Bullfinch which showed briefly along the east bank. This was our first record for two years.

Sunny, cold and calm with a frost. There were nine Great Crested Grebes and three Red-breasted Mergansers  offshore and 80 Brent Geese on the beach. Waders included the single Grey Plover and Bar-tailed Godwit on the beach and three Snipe on the Marsh Pool. Other birds included a Kingfisher, the pair of Stonechats, a Song Thrush in the churchyard, three Chiffchaffs, six Linnets and three Reed Buntings (females or immatures) in bushes by the coastal path.

It seems that Greg (and presumably Max) had the site to themselves on this sunny and calm day. Two Kingfishers were noted and four Snipe were out in the open on the Marsh Pool “sunbathing”.

Sunny and cold with a light NW wind. Six Greylag Geese flying west along the beach early morning were the first seen here since May. Three Red-throated Divers and a Great Crested Grebe were noted offshore, a Shelduck flew west and a Velvet Scoter flew east at 10.50 am. A female Marsh Harrier flew west at 10.35 am and waders included a Grey Plover west and 17 Sanderlings on the beach. A Kingfisher was along the middle brook, a Grey Wagtail in the sluice car park, there were three Chiffchaffs, and an unusual gathering of four Goldcrests together at the Obs. A pair of Reed Buntings was in the bushes opposite the Obs.

Cloudy, cold with a fresh NE wind. A modest start to the month with three duck Eider flying east the highlight. There were also ten Common Scoters (six west, four east). Waders included the three Lapwings on the Marsh Pool and the Bar-tailed Godwit on the beach. A first-winter Mediterranean Gull flew east and other birds noted included the pair of Stonechats, a Jay and a female Reed Bunting.